The Commission was established with the adoption of Article XXIII of the Connecticut Constitution, which was approved by the voters of this state in November, 1984.

ARTICLE XXIII OF THE CONNECTICUT CONSTITUTION:

The Commission makes appointments of statutorily mandated prosecutors, as well as other prosecutors requested by the Chief State's Attorney, who is responsible for the administration of the Division of Criminal Justice.

The Commission is composed of the Chief State's Attorney and six members nominated by the Governor and appointed by the General Assembly, two of whom must be judges of the Superior Court. 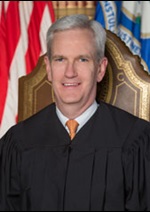 overnor appoints the Chairperson, and the members of the Commission volunteer their service to the State of Connecticut; they are not compensated.

The Honorable Andrew J. McDonald has served as an Associate Justice of the Connecticut Supreme Court since January 2013. In addition, he has served as chairperson of the Criminal Justice Commission since June 2017. He has nearly three decades of experience as an attorney in Connecticut. For most of his legal career, he served as a litigation partner for Pullman & Comley, LLC, where he chaired the firm’s appellate practice.

In addition to Justice McDonald and Chief State's Attorney Patrick J. Griffin, who serves as an ex-officio member, the current members of the Criminal Justice Commission are:

The Honorable Melanie L. Cradle was appointed in July 2020 to the Appellate Court by Governor Ned Lamont after serving as a Superior Court Judge since March 2013. She served as a senior assistant state’s attorney for the Ansonia-Milford Judicial District and as an assistant state’s attorney in the New Haven geographical-area courthouse. Prior to that, she was an associate in a general practice law firm in Hartford.

Robert Berke has been an attorney since 1992 and practices in the fields of civil and criminal litigation in state and federal courts. He also served as an assistant public defender in Connecticut from 1992 to 2000. He is the chair of the Town of Woodbridge Police Commission and has served on the Town of Woodbridge Board of Ethics, the town’s Planning and Zoning Commission, and as town moderator. He received a B.A. in Criminal Justice from the State University of New York at Albany and a J.D. from Quinnipiac University School of Law.

Reginald Dwayne Betts is a poet, memoirist, and lawyer. At age 16, Betts, an honor student, was sentenced to nine years in prison after committing a carjacking. There he took up reading and writing poetry and earned his high school diploma. Despite struggling to find employment and realize his academic goals upon his release, Betts eventually earned a B.A. from the University of Maryland, an M.F.A. from Warren Wilson College’s Master’s Program for writers, and a J.D. from Yale Law School. He is now an attorney advocating for prisoners who have found themselves in circumstances similar to his own, has published three books, and is working toward a Ph.D. in law at Yale.

Moy N. Ogilvie has served as a member of the Criminal Justice Commission since 2011. She is also an attorney and the managing partner of McCarter & English’s Hartford office. Her areas of practice include liability and toxic tort cases and commercial litigation matters. She also handles pro-bono cases for Lawyers for Children America and other nonprofit legal organizations. She currently chairs McCarter’s Diversity and Inclusion Committee, and also serves on the boards of directors for the Connecticut Bar Foundation and Hartford Youth Scholars. She received her B.A. from Bowdoin College and her J.D. from Boston University School of Law.