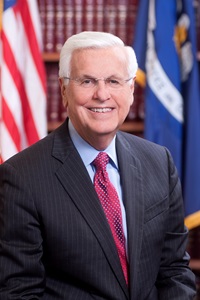 Jim Donelon has served as Commissioner of Insurance for the state of Louisiana for more than 15 years.  He was first appointed as Insurance Commissioner in February 2006 when the seat was vacated by the incumbent. He was later elected to fill the unexpired term in 2006 and has been re-elected to four consecutive full terms in 2007, 2011, 2015 and 2019. His current term will expire in 2023.

Jim was elected as the President of the National Association of Insurance Commissioners' (NAIC) in 2013 and currently serves as Chairman of the Surplus Lines Task Force of the NAIC and on its Executive Committee.

Jim has served the state of Louisiana for decades. He was first elected to public office in 1975 as Chairman of the Jefferson Parish Council.  He also served in the Louisiana House of Representatives from 1981-2001 where he served as Chairman of the Committee on Insurance.

His public service career also includes 33 years in the Louisiana Army National Guard where he retired with the rank of Colonel and received the prestigious Legion of Merit medal. Jim serves on the Board of Directors for the Blood Center for Southeast Louisiana.

Jim and his wife Merilynn reside in Jefferson Parish. They are the parents of four daughters and grandparents of eight grandchildren.