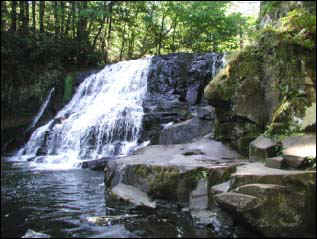 The youngest rocks in Connecticut lie in the central part of the state. Wadsworth Falls State Park is made up of those young rocks, only about 200 million years old. About 250 million years ago all of Earth's land made up one huge continent called Pangea. It began to break up about that time, with large pieces of continental crust moving in various directions. What is now North America broke away from present-day Europe and Africa. As this occurred, tension fractures formed in the land, such as happen if you try to stretch cookie dough or modeling clay. Two such fractures formed in central Connecticut, allowing a long narrow valley to drop below the level of the surrounding land. Sediments from the surrounding highlands washed into the basin. Deep fractures formed in some places and lava flowed up to the surface from the upper mantle. Three such lava flows filled the valley and covered the surrounding uplands. In between the flows, sediments continued to flow into the still dropping valley. We now have a pile of sedimentary rock (made from the sediments), lava flow, sedimentary rock, lava flow, sedimentary rock, lava flow, sedimentary rock. These are shown in Figure 1. Finally, the eastern side of the valley dropped faster than the western side, so now the rocks all dip toward the east. Over the intervening 200 million years, the higher uplands have eroded down so they are now much lower than they were and the basalts have all been eroded off of them. Basalts are now found only in the valley, where their lower elevation protected them from erosion. 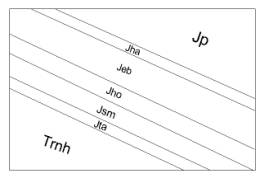 Sedimentary rocks are made up from sediments, usually deposited by water in low areas such as streams, lakes and oceans. Over a long time these sediments can become so thick the pressure compresses the grains close together. Groundwater moving slowly through them gradually deposits dissolved minerals, such as calcium, silica or iron, between the grains, cementing them together. The lava flows cooled and solidified into basalt (also called traprock).

Start your exploration of the park on the Scout Trail, which begins just past the swimming pond. Where the trail follows the stream edge, you will soon come to a shelf of flat rock. Sometimes water may cover this outcrop. The reddish brown rock is the Portland Arkose, the famous brownstone quarried for years in Portland and used for the brownstone buildings at Wesleyan and many other buildings around Connecticut, plus the brownstone buildings of New York City. It was shipped as far as San Francisco and is one of the rocks used in building the Parliament Building in Toronto, Canada. 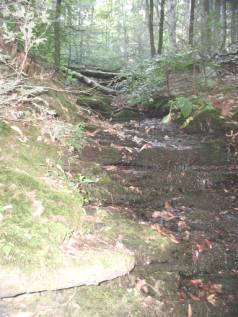 Here it is fine-grained and fairly smooth. If you run your fingers across it, you can feel the fine sand-sized grains that make it up. Arkose is a type of sandstone, made up mostly of quartz but also of feldspar. Most of the red color comes from the iron cement.

Watch for a stream coming down the hill on your left (Figure 2). The layers of arkose are thinner here. Some stick out, others are more indented. This is the result of differential weathering, meaning the harder layers have weathered less from the stream's flow than the softer layers. If you look closely at the layers, you will see that some are coarser than others, even containing pebbles. This is because the layers formed as streams carried sediments, depositing them probably in a lake. When stream flow was low and slow, only fine sediments could be moved by the water. But during floods, faster water could move materials as large as pebbles. So the various layers represent changes in the weather. 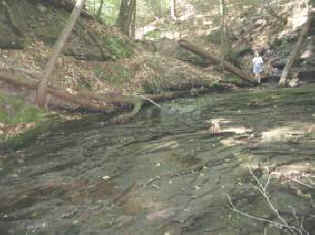 Continue to the end of the Scout Trail. Turn right on the Orange (Main) Trail. Then follow the Blue Trail when it turns off to the right, toward Little Falls. Soon the trail crosses a streambed, dry in drier seasons. The Portland Arkose here is very fine grained and thinly bedded (Figure 3). 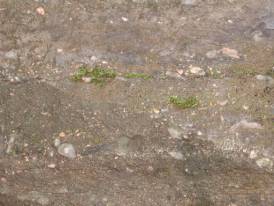 Look at the cliffs just downstream from the crossing. You will see some very coarse layers of arkose here (Figure 4). These were deposited during a flood, when fast-flowing water was able to move gravel-sized particles and dump them into a lake.

Continue on the Blue Trail to Little Falls. Observe the many layers of arkose and the differential weathering which causes some layers to protrude more than others. Follow the Blue Trail to the top of the cliff. Look at the downstream side of the large outcrop that rises above the falls. The beds are very fine grained and thin, but in some places they cut each other off. This is known as cross bedding and formed either when the stream changed direction of flow or in a sand dune (Figure 5). 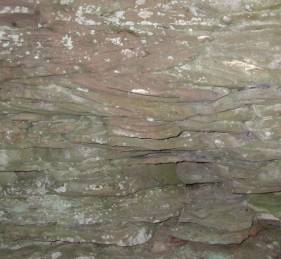 Beyond Little Falls the Blue Trail ends at the Orange Trail. Turn right on the Orange Trail and follow it to its end at Cherry Hill Road. To get to Large (or Wadsworth) Falls, turn right and follow Cherry Hill Road about 700 feet until you see the parking lot for the falls. Walk down the ramp and across the grass. A cement sidewalk will take you to the top of the fall. It is wheelchair accessible. Instead of taking the sidewalk, walk down the steps to the bottom of the falls. 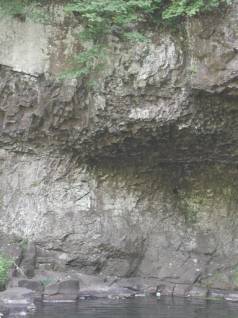 Figure 6. To the left of Wadsworth Falls, the Hampden Basalt consists of an upper, columnar flow (the bottom of the columns are visible here) and a lower, more massive flow.

The rock here is dark gray, rather than red. This is the Hampden Basalt. Here at the falls two flows are exposed. The lower flow is massive, with widely spaced fractures. Near its top are a few holes where air bubbles escaped from the lava while it was still hot enough to be liquid. Above this flow the basalt forms columns, separated by closely spaced fractures (Figure 6). To the right of the falls, by looking closely at the top of the lower, massive basalt, you can see vesicles. These are holes in the basalt made when gas bubbles escaped from the basalt flow as it started to solidify. In some basalt these vesicles will be filled with a mineral which was deposited in the vesicle by hot fluids soon after formation, or later by groundwater with dissolved minerals moving through the rock. These gas bubbles are also sometimes elongated by the upward movement of the gas, forming pipe vesicles.