In addition to a beautiful picnic area, beaches, shelters, and even a model airplane runway, Sherwood Island State Park is home to some interesting Connecticut State geology. Although there is a lack of actual rock outcrops, coastal geology is an important aspect of the park's distinctiveness. 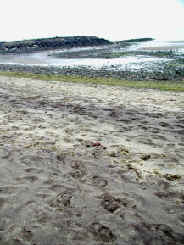 Strolling down the beach, you may notice the sand alternating in colors from tan to red to black. Even though the red and black layers may look "dirty", the red layers are comprised of garnet and the black layers contain magnetite. Garnet, the Connecticut state mineral, and magnetite, a dark metallic mineral, have very high densities. Therefore, they have the tendency to settle out from the less dense tan layers, which are mostly quartz, as a result of wave energy (Figure 1). Just like the technique for gold panning, the dense minerals settle out of the system, leaving behind well-formed layers. Additionally, as its name suggests, a magnet will attract magnetite and you could easily separate the magnetite from the quartz and garnet grains.

In addition to the variety of sand types, as you look up and down the beach you will notice two large jetties projecting out into Long Island Sound. These too have geologic significance. The dark black jetty located downhill from the picnic area is comprised mainly of basalt, which is a dark, fine-grained igneous rock that forms when lava cools quickly on the surface of the earth. Since the basalt boulders were brought into the park from an alternate location, they have not had the exposure time necessary to exhibit the smoothing effects of erosion. Therefore, the basalt boulders are large and angular as opposed to small and round (Figure 2). 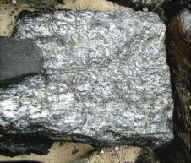 Another jetty is located before the small bay. Overall, this jetty is lighter in color than the basalt jetty, since it is comprised mainly of schist and gneiss. Extremely shiny, especially in strong sunlight, schist is a metamorphic rock formed under high temperatures and pressures. In this jetty, the schist boulders contain mostly mica and quartz (Figure 3). Like schist, gneiss (pronounced "nice") is a metamorphic rock that formed at great depth where pressures and temperatures were very high. The gneiss boulders in the jetty have distinct dark and light layers, which are sometimes folded into intricate curves and swirls (Figure 4). 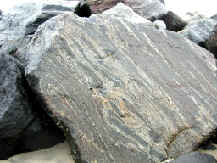 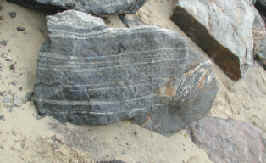 The minerals that give gneiss its distinct banded quality are biotite, quartz, and feldspar. The dark layers are the mineral biotite whereas the lighter layer is often feldspar or quartz. In addition to schist and gneiss boulders, you may also happen across a few basalt boulders in this jetty, although they are not as common as in the previously discussed jetty. 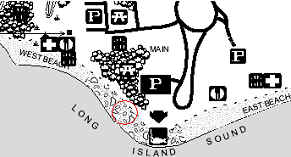 The highest topography in the park is a partially eroded drumlin; an elongated hill comprised of till formed by glacial deposition (Figure 5). Till is very poorly sorted and ranges in particle size from clay to boulder. The drumlin is experiencing erosion on the Sound side. This is evident by the numerous cobbles that eroded out of the drumlin till, which are now located on the beach (Figure 1).

The recently constructed memorial to September 11, 2001 is constructed on the point at Sherwood Island State Park. The memorial consists of several newly planted trees as well as several plaques. At the end of the point in the Sound, you can see several large boulders that may have been glacially deposited when ice covered Connecticut from 26,000 to 12,000 years ago.