The Geology of Kettletown State Park

The William Miller (blue blazed) Trail, to your right from the road heading to the Youth Group Camp Area, provides a good introduction to a variety of rocks. At the T in the trail, turn right. About 500 feet down the trail you will encounter a large, lumpy brown boulder at the edge of the trail. (Figure 1) This glacial erratic came from the northwest, from the Pomperaug Valley. Erratics are boulders left behind by the glaciers when they melted. They are sitting on bedrock different from the type of rock they are. 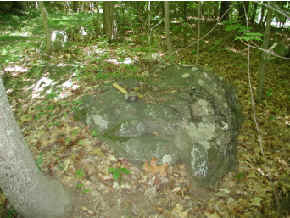 Figure 1. One of many basalt erratics found along the blue trail. Notice the lumpy texture, caused when the liquid lava flowed into water. This is a piece of pillow basalt.

We know which way this erratic came from because it is a chunk of basalt, and the nearest basalt bedrock is found three miles to the northwest in Southbury. Also, outside the park glacial striations indicate a southeast movement of the ice. Striations are scratches left in exposed bedrock when ice with rocks frozen in the bottom of it moved over the exposed rock, gouging grooves. The boulder's roundness results from the wearing off of corners and edges during transport.

Sometimes lava flows into water, causing the surface to solidify instantly, while the inside of the flow is still liquid. This results in blobs, which then break open, allowing the lava to flow a little farther, then form another blob. The result is pillow basalts, and it appears this boulder and several more a little farther along the trail are pillow basalts. At the time basalt was flowing into the valley, Connecticut was much farther south and much drier than it is now. But there were lakes here and there, especially during the monsoon season.

For more information on how the basalts and sedimentary rocks of Connecticut formed, see the geology of Penwood State Park.

This part of Connecticut is all metamorphic rocks (except for the Pomperaug Valley in Woodbury and Southbury). The rocks in western Connecticut have been changed from the rocks they originally were by high heat and pressure. The rocks of Kettletown were originally Iapetos ocean floor sediments, mixed with a few basalt flows. As Africa and Europe moved closer to North America the ocean crust was being forced under the continental crust and these sediments were scraped off, then squished by the collision of some microcontinent(s). The resulting heat and pressure changed the sediments and basalt to gneiss, schist, quartzite, marble, and amphibolite, all metamorphic rocks. Gneiss, schist and amphibolite occur in the park, although no schist outcrops were seen along the described trails. 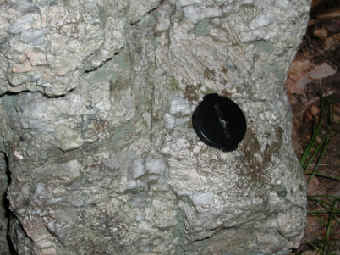 Figure 2. Notice the large grains of white feldspar in this pegmatite boulder. The lens cap is 1 3/4" in diameter.

Continuing on down the trail, you will see more of the pillow basalt erratics. Farther along some pegmatite erratics have been left behind (Figure 2). They are lighter colored than the basalt and very course-grained. These are another type of igneous rock (rock which was once melted, like the basalt). But pegmatite formed from molten rock very far below the surface. Because it cooled very slowly, the crystals were able to grow very large. Pegmatite intrusions are generally small. Often they are found as thick or thin white or pink veins in other rocks. Usually pegmatite has the same composition as granite, only coarser. The predominate minerals in this pegmatite are feldspar and quartz. Feldspar is the duller one, quartz a little shinier.

The blue trail continues past two trails to the left (shortcuts to the other side of the loop). Later it makes a sharp left turn. Soon you will see many amphibolite boulders, especially after crossing a small stream. These are a type of gneiss (pronounced "nice") that is black with some white banding here and there. Amphibolite was once basalt flows on the ocean bottom, but have since been metamorphosed so that the original minerals converted to amphiboles (a group of minerals). The amphibole making up this rock is called hornblende. Its dark green to black color makes the rock very dark. 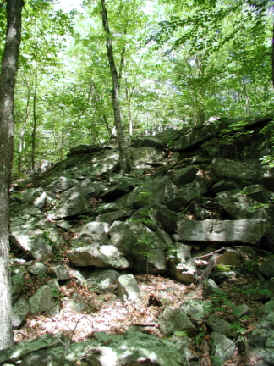 Figure 3. Loose, angular boulders plucked by the glacier from the nearby outcrop.

Farther along you will see two outcrops in the woods on the right, with an unmarked trail going between them. Follow the unmarked trail a short distance to outcrops on the right. Many loose pieces of rocks are lying around on the ground (Figure 3). These are pieces of the nearby outcrop which were "plucked" from the bedrock by the glaciers. The ice moved from north to south. In summer there was some melting, especially during the day. Water moved down into fractures in the rock, then froze at night or when cooler weather came. As water freezes it expands and enlarges the fractures. The movement of the ice then plucked these loose rocks from the outcrop and left them nearby. The angular shapes of the blocks indicate they were not moved far by the glaciers. Remember the blocks of pillow basalts you saw earlier? They were rounded because the ice had moved them several miles. 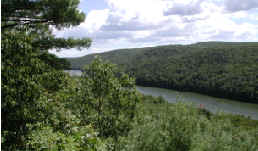 Go back to the main Blue trail and continue on to the overlook. On your way look at the rocks along the trail. On some of them you will see that the bands of different minerals in the rocks have been folded. When you reach the first overlook you have a good view of Lake Zoar (Figure 4), which is the Housatonic River backed up behind the Stevenson Dam. The rocks at the overlook are the biotite-rich gneiss rock which makes up part of the Collinsville Formation. The amphibolite you saw earlier was also part of the Collinsville Formation. Here the rock contains red and pink garnets.

Go on to the south overlook. These rocks have pink garnets up to 1/4 inch in diameter which stick up above the surface of the gneiss. The garnets are harder than the other minerals in the gneiss, so have withstood attack by water, feet and ice more than the softer minerals. This is an example of differential erosion. You can see many other similar examples throughout the park. In most outcrops some minerals stand out a little more than others because of greater resistance to weathering.

Continue on the Blue Trail back to the beginning. 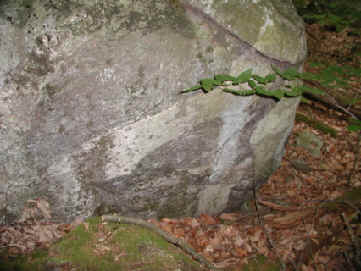 Another interesting trail to follow starts from the main campground road near the gate. On the map it is labeled the Pomperaug/Blue Trail and it also is blue blazed. As you start the trail it goes uphill through a classic area of upland till. This is material dropped by the glaciers as they melted, and consists of a mixture of grain sizes from silt to boulders. Most boulders are rounded as a result of the travel in the ice. On the first steep part of the trail a large boulder on the right contains a lumpy white quartz vein and a fine-grained quartz intrusion (Figure 5). 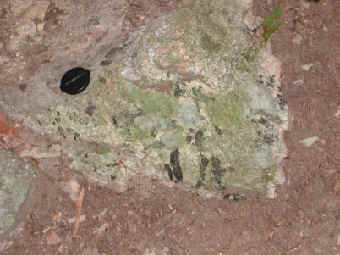 After passing large boulders, still on the steep part of the trail, you will encounter a long rock, about 1 1/2 feet long, in the trail near a tree with a blue blaze. The black minerals in the rock are tourmaline. Some are as long as two inches (Figure 6).  Tourmaline is used as a semiprecious gemstone when found in transparent crystals of red, pink, green or blue color. Most of the tourmaline in Connecticut is black. Its color varies as its chemical composition varies. Black tourmaline gets its color from iron.

Please don't try to break the tourmaline out of the rock, as it will only fracture into small pieces. Leave it for others to see. 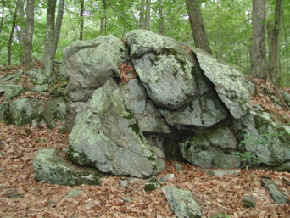 Figure 7. Tunnel in rock. Look closely for pink and black banding in this gneiss outcrop.

After the trail levels out, watch for an outcrop with a tunnel, on the right side of the trail (Figure 7). Some of these rocks are very smooth and the pink and black banding of the gneiss is very visible. Starting down a hill, you will see more glacial plucking on the right. As you continue, examine the rocks in the trail. Some have white quartz veins, folds, or differential weathering. One large outcrop in the trail is a gneiss with lots of small, shiny micas in layers between feldspar and quartz layers.

In these gneisses, quartz is gray to clear and shiny, feldspar is white or pink with a dull, opaque surface. Often the rocks are partially covered with moss or lichens, which really like to grow on rocks.