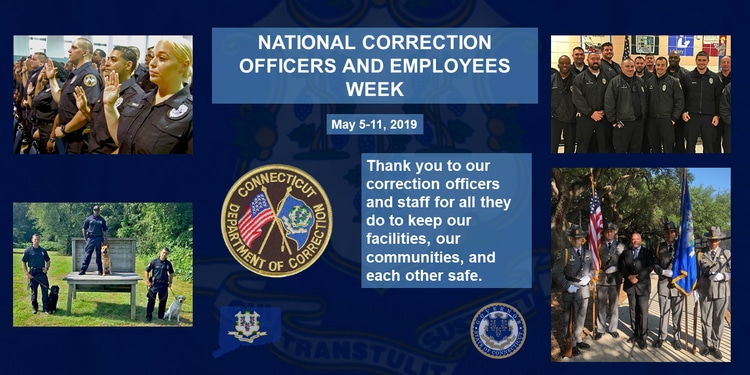 (HARTFORD, CT) – Governor Ned Lamont and Department of Correction (DOC) Commissioner Rollin Cook are inviting Connecticut residents to join them in recognizing the selfless service performed by the state’s correction officers and correctional employees during National Correction Officers and Employees Week, which runs from May 5-11, 2019.

Originally established as National Correction Officers Week by President Ronald Reagan under proclamation in 1984, the observation was expanded by Congress in 1996 under a resolution to include other vital members of correctional staff.

“I had the opportunity to meet and talk to several corrections officers when I visited the TRUE Unit in January. They have one of the toughest jobs and the work they do to engage and help offenders is critically important,” Governor Lamont said. “These professionals should be commended for their devotion, bravery, and service to our state.”

“I salute our staff during this week for all they do to keep our facilities, our communities, and each other safe,” Commissioner Cook said.

The DOC annually observes the week through various employee recognition events at the agency’s facilities throughout the state.