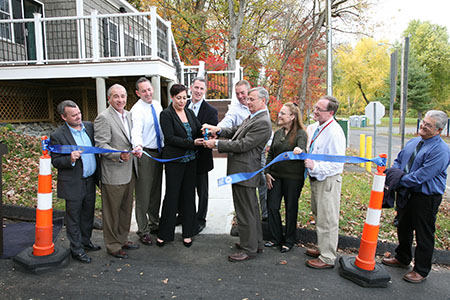 The Connecticut Department of Transportation today formally opened the new Rocky Hill-Glastonbury Ferry office on the Rocky Hill side of the Connecticut River. The old ferry office was little more than a shed with an electric hook-up and no running water.

The new office, built with a combination of a federal Ferry Boat Discretionary Grant and state funds, has all of the features of a modern office and includes “green” construction practices – such as energy-efficient lighting, an Energy Star-rated HVAC system and thermo-pane windows. It is also located on state-owned property on higher ground than the old office, and thus will not be susceptible to the seasonal high waters of the Connecticut River.

“Providing a good, clean and safe work environment makes for a safe work place for the crew which operates continuously through the season,” said DOT Commissioner James P. Redeker. “Improvements to both landings, including fencing, gates and cameras, will improve the public safety and security for the ferry.”

State Rep. Antonio Guerrera of Rocky Hill said, “This popular ferry has been serving Connecticut citizens and tourists since 1655 and it is important that we continue to make investments in enhance operations.”

Commissioner Redeker also thanked the Carter Mario law firm of Hartford, which is helping defray the cost of ferry operations by advertising on board the ferry, with boards that tell the story and timeline of this historic ferry.

The Rocky Hill-Glastonbury Ferry is the oldest continuously operating ferry in America. It operates from April 1 to November 30 each year. The DOT also operates a second ferry on the Connecticut River, between Chester and Hadlyme.