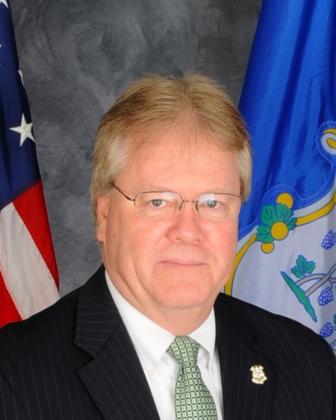 Director Hackett is also currently serving as the Governor’s Deputy Homeland Security Advisor, State Single Point of Contact for the National First Responder Network Authority (FirstNet), and was appointed by Governor Malloy to the State E-911 Commission. In addition, he is the Statewide Interoperability Communications Coordinator, the agency representative on the State Emergency Response Commission and co-vice chair of the Long Island Sound Area Maritime Security Committee.

Director Hackett has been designated by the Governor as State Coordinating Officer (SCO) for eleven Connecticut Presidential Major Disaster Declarations. Director Hackett chairs the Northeast States Emergency Consortium (NESEC) and serves on the Board of Directors for the International Emergency Management Group (IEMG), which consists of the New England States and the Eastern Canadian Provinces. He is also on the Board of Directors of the National Emergency Management Association (NEMA), serving as secretary of the association.

From November 16, 2018 to January 9, 2019, Director Hackett also served as the Acting Commissioner of the Department of Emergency Services and Public Protection, appointed by Governor Malloy.  He also served as Deputy Commissioner responsible for the Division of Emergency Management and Homeland Security from September of 2011 to June of 2012, and again from April of 2017 to January of 2019.

Prior to joining state service, Director Hackett served as a career firefighter, as well as the Union Local President of the International Association of Firefighters, retiring with the rank of Deputy Fire Chief /Deputy Fire Marshal for the Branford, CT Fire Department.  He holds numerous state and national certifications, including state certification as an Emergency Medical Technician since 1977.  He is the recipient of several commendations and awards for performance of duty, including recognition for three separate life-saving events.