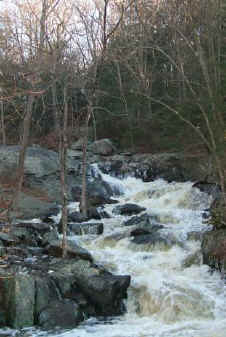 This description of the geology of Southford Falls State Park begins by following the trail along the falls below the dam for Papermill Pond. Although a small park, Southford Falls has a lot of exposed geology. The park is in the Iapetos Terrane of Connecticut, which makes up a large part of western Connecticut. The rocks in the terrane were formed from ocean bottom sediments that were scrapped off as the western ocean floor was being subducted (pulled down) under the eastern ocean floor. These sediments were buried, compressed and heated, forming the metamorphic rocks seen here in the park. The Iapetos Ocean existed approximately where the Atlantic Ocean is today, but completely disappeared when Europe and Africa combined with North and South America about 250 million years ago.

Eightmile Brook is very rocky and apparently was deepened at one time, as the ridge of rock between the stream and trail appears man-made. The deepening was probably to increase water speed for the numerous mills that worked along the brook in the past.

This rock is mostly covered with lichens and moss, but bare rock is occasionally revealed. If you look closely you will see small folds in the rock, visible where dark and light bands formed. After crossing the boardwalk and walking uphill, the outcrop on the right shows good layering of dark and light minerals, called gneissic banding. (Gneiss rhymes with ice). This rock is known as the Collinsville Formation and mainly consists of the minerals quartz, plagioclase, biotite, and muscovite. Lesser amounts of garnet, staurolite and kyanite occur in some places.  If you have a compass and want to practice measuring strike and dip of rocks, this is a good place. 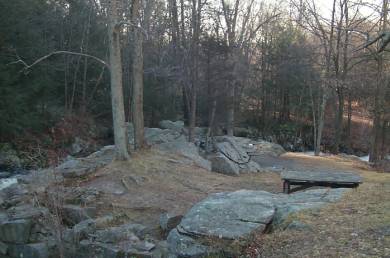 Figure 2. Ridge of rocks along the brook.

Walk up the short trail to the fire tower for a good view of a U-shaped valley to the south, steepened and widened by the grinding of rocks in the ice as a glacier flowed down it between 16,000 to 24,000 years ago. The rocks at the base of the tower contain some folds. Also notice the tiny ridges in the rock around the tower base. These are examples of differential weathering. The ridges are made up of minerals that are a little harder than those in the rest of the rock, thus they are not weathering as fast. 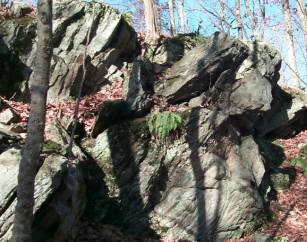 Continuing on around to the east side of the park, the trail passes through a valley. Along the trail about half way to the pond, you may start to see dark brown potato-shaped stones in the trail. Some are as large as a foot across. These are pieces of basalt moved south by the glacier from somewhere north of I-84 where there are the remains of small basalt flows from about 200 million years ago. Basalt tends to break up easily when transported by water or ice, so it is unusual to see basalt erratics, as rocks moved by glaciers are called. Basalt is dark gray, but weathers to a rusty brown color because of its iron content.

As you near the pond, another trail turns off to the left. The outcrop on the left of the main trail here contains large, angular blocks broken off of the nearby outcrop. This is an example of glacial plucking. Water froze in cracks in the rock in the winter, enlarging them. As the glacier moved south in the summer over this outcrop it broke off the rocks, moving them only slightly out of place. More plucking occurred near the pond, also to the left of the trail. 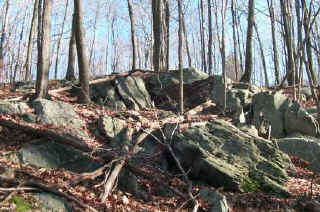 Before reaching the pond, if you walk through the woods to the ridge on your right, you will see an example of a rock type known as granofels and identified on the state bedrock map as the Taine Mountain Formation. It is more massive than the gneiss, with little or no banding of different colored minerals.  The minerals in this rock are the same as in the Collinsville Formation, but arranged randomly. There is a pegmatite vein running through the granofels in one place. It is lighter colored and much coarser grained than the granofels, and formed when hot, melted rock was injected into a fracture in the granofels.