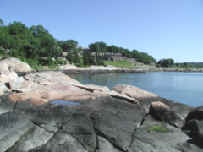 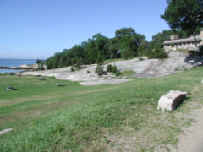 An ideal setting for families, Rocky Neck State Park has a wide array of interesting geological features perfect for exploring. The best geology in the Park can be investigated along the water's edge near the beach, only a short walk from the parking lot. Likewise, the hiking trails in the Park have nice examples of glacial plucking and glacial boulders. 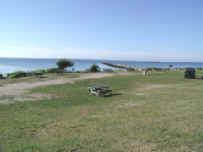 In addition, glaciation had a huge impact on the way in which Rocky Neck State Park appears today. During the most recent advance of glaciation in New England, which took place approximately 24,000 years ago, there was a point where the climate became too warm for the advancing glacier. As the ice tried to flow south, the warm climate melted the glacier back. For approximately 5000 years, the glacier hovered over New England, advancing and melting. Containing large quantities of rock, sand, and clay, the glacier dumped these materials as the ice melted. Known as a terminal moraine, a large pile of rock, sand, and clay piled up at the edge of the glacier, marking the maximum advance of glaciation in the Northeast. Long Island, Fishers Island, Bluff Point, Napatree Point, Block Island, Martha's Vineyard, Nantucket, and Cape Cod all formed as a result of that terminal moraine. There is usually very little wave energy at Rocky Neck State Park because Long Island and Fishers Island act as a natural
breakwater, protecting the entire coastline of Connecticut. Both Long Island and Fishers Island can be seen on a clear day from the beach at Rocky Neck State Park (Figure 1). 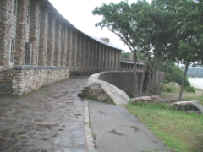 Figure 2: Outcrops of granitic gneiss below the pavilion.

A good place to start exploring Rocky Neck State Park's geology is the area surrounding the large stone pavilion that is located near the beach. Directly beneath the pavilion are large outcrops of granitic gneiss (Figure 2). Gneiss (pronounced "nice") is a high grade metamorphic rock subjected to intense heat and pressure during formation. Gneiss is easily identifiable by the segregation of light and dark minerals giving it a banded texture. Gneiss usually consists of mostly elongated and granular, as opposed to platy, minerals. The granitic gneiss exposed at Rocky Neck State Park is part of the Potter Hill Granite Gneiss dating back to the Proterozoic. This gray, coarse-grained gneiss is irregular in texture with patches and streaks of pink granite. Likewise, there are lenses of orange-pink microcline feldspar. Other minerals present in the Potter Hill Granite Gneiss include quartz, garnet, tourmaline, and biotite. Rock and mineral collecting is prohibited in State Parks. 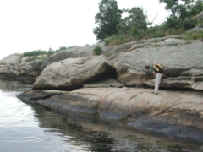 Several interesting features such as folds, potholes, glacial boulders, glacial polishing, and pegmatite veins are found within the Potter Hill Granite Gneiss at the outcrops surrounding the pavilion. A large fold, which also happens to be a glacial boulder, is a perfect example of the intense pressure the Potter Hill Granite Gneiss experienced during metamorphism (Figure 3). Likewise, potholes line the rocky shoreline (Figure 4). Drilled into solid rock, the potholes were a result of a small rock swirled around in one place by wave energy in the Sound. A clue to Rocky Neck's glacial history can also be found near the water's edge. One area in particular looks as if it were buffed to a high shine. This is the result of glacial polishing, when the glacier that covered the area 24,000 years ago acted like fine grit sandpaper (Figure 5). Furthermore, there are many pegmatite veins that cross throughout the Potter Hill Granite Gneiss. Pegmatite is an igneous rock that formed from molten rock buried deep below the surface of the Earth. 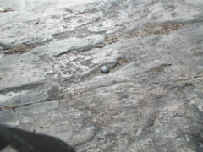 Since the molten rock was well insulated beneath the surface of the Earth, it cooled very slowly, allowing the crystals to grow very large. In fact, pegmatite crystals can reach lengths of up to 12 m. Generally small, pegmatite intrusions usually have the same composition as granite, only coarser. Furthermore, pegmatite intrusions are of great interest to mineral collectors because they may contain a variety of rare minerals. A few of the pegmatite veins contained orientated books of biotite mica, which resembled razor blades (Figure 6). Some other pegmatite veins contained clusters of black tourmaline (Figure 7). 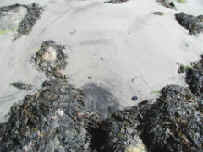 Figure 8: Magnetite bands in the sand.

The beach at Rocky Neck is an excellent example of a pocket beach, a crescent-shaped stretch of sand wedged between two headlands. Interesting features found in the sand are bands of magnetite, a dark, metallic mineral. The magnetite collects in bands due to its density (Figure 8). Since magnetite is denser than quartz and feldspar (the minerals that make up the rest of the sand) it has the tendency to settle out as a result of wave energy. Just like the technique for gold panning, the dense minerals settle out of the system, leaving behind well-formed layers. Additionally, as its name suggests, a magnet will attract magnetite and you could easily separate the magnetite from the quartz and feldspar grains.

In addition to the beach area of Rocky Neck State Park, the hiking trails have good examples of Connecticut geology. Entering the white trail from the south end of the Park, you will come across several examples of glacial plucking (Figure 9 and 10). During glaciation in the summer, there was some melting, especially during the day. Water moved down into fractures in the rock, and then froze at night or when cooler weather came. As water freezes it expands and enlarges the fractures. The movement of the ice then plucked these loose rocks from the outcrop and left them nearby. The angular shapes of the blocks indicate they were not moved far by the glaciers. Also found on the white trail are several rock ridges composed of Potter Hill Granite Gneiss. Interestingly, the rock ridges all trend north-south (Figure 9 and 11). 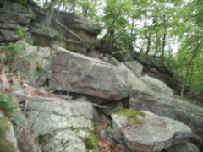 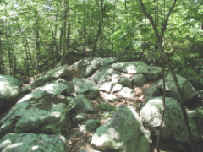