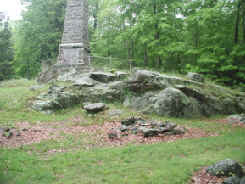 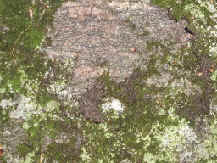 Figure 1: Close up of Rowe Schist with garnet crystals.

In addition to being a Revolutionary War Memorial, Putnam State Park is an excellent site to examine the Rowe Schist, a silvery, medium to coarse-grained schist that contains garnet and muscovite mica. Even though the garnets in the schist are not of gem quality, they are dark red and range in size from 2-3 mm in length (Figure 1). Likewise, the Connecticut state mineral is garnet. Schist is a type of metamorphic rock that has undergone intense heat, pressure, and hot fluids. By definition, schist contains more than 50% platy and elongate minerals such as mica and amphibole. This high percentage of platy minerals allows schist to be easily split into thin flakes or slabs. 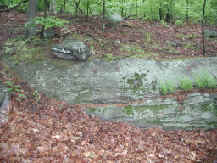 Figure 2: Well-exposed outcrop of the Rowe Schist near the Revolutionary War Memorial.

The Rowe Schist is exposed below the monument at the entrance to the park (Figure 4). The outcrop is massive in size and supports a large memorial to the Revolutionary War Soldiers (Figure 2).

As you continue down the trail to the right you can see on the left several large clusters of rocks. These rock clusters are believed to have served as foundations for the soldiers' living quarters. Likewise, other piles of rocks found are believed to be the remnants of bread ovens constructed by the soldiers. 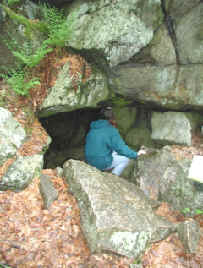 Also of geologic interest on the trail is a small rock shelter named Philip's Cave (Figure 4). Although referred to as a cave, it is actually a plucked rock shelter that was glacially formed. South-facing rock shelters like this one were at one time used by Native Americans because they are warmed by the lower sun in the winter, and protected from the higher sun in the summer (Figure 3). The rocks comprising the shelter are Rowe Schist. In this area of the park the schist is rusty due to weathering.