The Geology of Penwood State Park 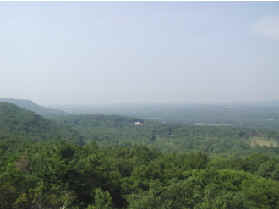 The youngest rocks in Connecticut lie in the central part of the state. Penwood is made up of those young rocks, only about 200 million years old. About 250 million years ago all of Earth's land made up one huge continent called Pangea. It began to break up about that time, with large pieces of continental crust moving in various directions. What is now North America broke away from present-day Europe and Africa. As this occurred, tension fractures formed in the land, such as happen if you try to stretch cookie dough or modeling clay. Two such fractures formed in central Connecticut, allowing a long narrow valley to drop below the level of the surrounding land. Sediments from the surrounding highlands washed into the basin. Deep fractures formed in some places and lava flowed up to the surface from the upper mantle. Three such lava flows filled the valley and covered the surrounding uplands. In between the flows, sediments continued to flow into the still dropping valley. We now have a pile of sedimentary rock (made from the sediments), lava flow, sedimentary rock, lava flow, sedimentary rock, lava flow, sedimentary rock. These are shown in Figure 1. Finally, the eastern side of the valley dropped faster than the western side, so now the rocks all dip toward the east. Over the intervening 200 million years, the higher uplands have eroded down so they are now much lower than they were and the basalts have all been eroded off of them. Basalts are now found only in the valley, where their lower elevation protected them from erosion. 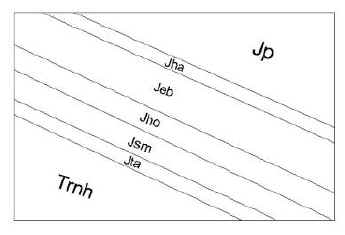 Sedimentary rocks are made up from sediments, usually deposited by water in low areas such as streams, lakes and oceans. Over a long time these sediments can become so thick the pressure compresses the grains close together. Groundwater moving slowly through them gradually deposits dissolved minerals, such as calcium, silica or iron, between the grains, cementing them together. The lava flows cooled and solidified into basalt (also called traprock). 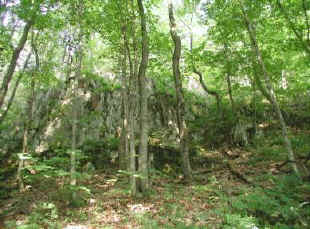 In the park, follow the road to the picnic area. Then walk up the closed road.  All along the road you will see outcrops of Holyoke Basalt, the middle of the three basalts.  In some places it forms columns, as in Figure 2.

Holyoke Basalt outcrops occur in many places along the road as you ascend toward the circle in the road. At the circle, follow the blue trail to the "Pinnacle". Along the way you will cross some Shuttle Meadow Formation siltstone in the trail (See Figure 3). Siltstone is thinly bedded (breaks in thin layers) and here is red in color because of the iron cementing the grains together. 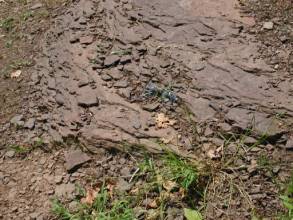 At the "Pinnacle" the basalt looks similar to the Holyoke Basalt, but this is the Talcott Basalt, the oldest of the three basalt flows. It is very rough on the top, more so than the Holyoke. Although the Talcott is the bottom flow, it outcrops higher than the Holyoke, the middle flow, because the flows are tilted toward the east.

If you continue along the yellow trail to the Cedar Ridge Overlook, you will see loose pieces of siltstone mixed with loose basalt as the trail follows a fairly flat terrace. This area is probably underlain by siltstone, but no true outcrops occur to be sure. The flatness of the area suggests a softer rock supports the area than the basalt in the higher area to the east and the steep drop to the west.

Return to the picnic area. Drive out toward the highway. Along the way there is an outcrop of red siltstone about three feet high on the right. It is about twenty feet long. This outcrop was not exposed when a geologist mapped the area in 1960. According to the geologic map of the Avon Quadrangle, which covers this area, this should be in the middle of the Holyoke Basalt, with the Shuttle Meadow siltstone to the west and the East Berlin siltstone to the east. Without being an expert on the siltstones it is difficult to tell which siltstone this is.