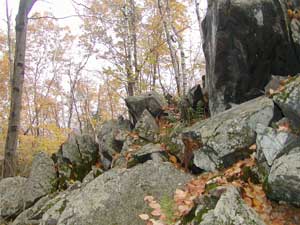 Mount Tom has a nice swimming beach and picnic areas. It is also a good hiking area with great views from the top, and interesting geology.

This description follows the yellow trail beginning in the picnic area south of the entrance road, goes to the tower on the top, then returns down the other side of the yellow trail loop, ending near the beginning site. The trail is uphill all the way, but is not usually very steep. Just take your time, stop to look at the rocks, and you will be rewarded with spectacular views from the top.

When you leave the small picnic area at the beginning of the yellow trail, go straight ahead. Follow the yellow trail markers at the branch in the trail. Shortly after that, there is a curved area that appears to be dug out. Beyond that area, in the woods, there is an outcrop of dark- gray gneiss. This is a rock with bandings of light and dark minerals, although here the rock is mostly dark hornblende, with lesser amounts of lighter plagioclase and quartz. 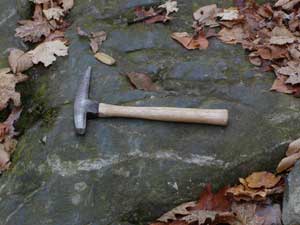 Rusty areas on the rock are caused by oxidation of some of the iron in the minerals. Around the bend in the trail, you will walk right over the gneiss, here smoothed by fine, frozen grains at the bottom of the glacier that moved over Connecticut about 25,000 years ago. Look for the light-colored quartz vein in this rock (Figure 1). 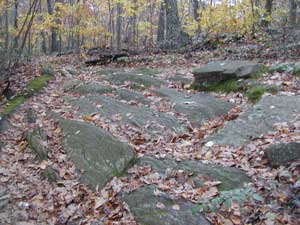 Figure 2. The foreground rocks are well-layered schist. The large block farther back is gneiss.

Around another bend in the trail, look at the outcrop on it. This one is schist with tiny dark-red, spherical garnets. The layering in the schist is nearly vertical and is especially noticeable near the left side of the trail (Figure 2). Schist is composed of mostly flat, mica flakes, causing the rock to be very thinly layered. Because some layers have more quartz or feldspar than others, they are harder, and weather slower, resulting in the higher and lower layers you can see in this rock (differential weathering).

As you walk through the forest, notice many individual rounded boulders scattered everywhere. These are glacial boulders, left by melting ice. Generally, the ice did not move boulders very far. But occasionally, you will find a boulder that is a different kind of rock than the rock it is sitting on. It is then called a glacial erratic. You have now seen the two kinds of rocks that make up the park, so look for boulders that are of other rock types. 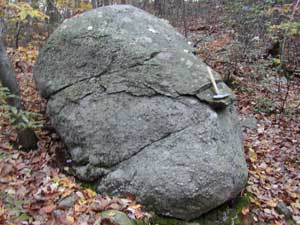 Along the trail, several, very large "erratics" have large, rectangular white feldspar crystals in them. Some are as large as half an inch long, while others are a little smaller, but definitely larger than the other grains in the rock. The rest of the rock is quartz, biotite and plagioclase (Figure 3).

Look for vertical rocks on the left side of trail, with a tree growing on top of them. This tree's roots enclose the gneiss exposure (Figure 4). 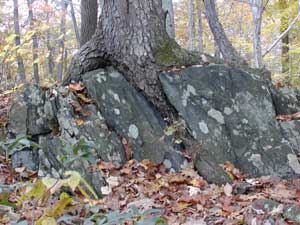 Figure 4. Here, the gneiss is nearly vertical. A large tree growing on top enclosed the gneiss in its roots. The light spots on the rocks are lichens. 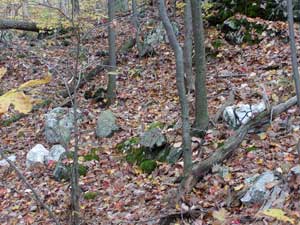 Figure 5. Some of the pieces of quartz lying in the valley, just past the rocks in Figure 4.

Just past these rocks, look down into the valley, to your left. The white spots on the valley are boulders of milky quartz. If you go down to see them, you will find some with the gneiss attached to the quartz. These were probably a large quartz vein, intruding the gneiss, that has somehow been broken up (Figure 5). 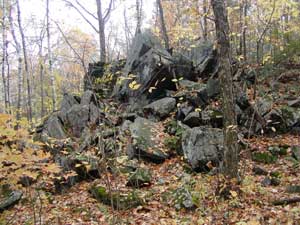 Figure 6. This jumble of rocks was probably left here by the glaciers. The pieces may have been connected at one time, maybe breaking up as the ice moved a very large boulder. Ice wedging (the freezing and thawing of water in cracks) broke the rock up further during the winter.

Return to the trail where you left off. The trail branches off, just beyond the quartz boulders. Take the right trail, which goes to the top of Mount Tom. You will walk over some very dark rocks containing lots of black to very dark-green hornblende. Because the rocks are mostly hornblende, the rock is called amphibolite gneiss. Hornblende is the most common member of a group of minerals known as amphibolites. Look for a jumble of rocks, around the corner, on the left (Figure 6). They look as if a large boulder was dropped from a distance, shattering the rock into the many pieces, still in place. But most likely, these pieces were left behind by the melting ice, then maybe broken up more by the freezing of water inside the fractures, which slowly forced the fractures to grow larger (ice wedging).