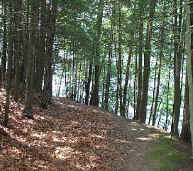 Kettletown State Park, situated in the towns of Southbury and Oxford, contains 605 acres and was originally inhabited by the Pootatuck Indians, members of the Algonquin group. Early colonists reportedly traded one brass kettle for use of the land for hunting and fishing.  Eventually, the settlers acquired complete rights to the area and, by 1758, the Pootatucks had either migrated to the northwest or perished.

Although the Pootatucks were expert fisherman and hunters, their main occupation was farming. They raised fine crops of beans, squash, tobacco and apples. The Pootatucks developed a drum communications system which could carry a message over 200 miles in just two hours. All that remains now in the Kettletown area of this once prosperous tribe is an occasional arrowhead. In 1919, their original village was covered by the water of the Housatonic River when the Connecticut Light and Power Company constructed the Stevenson Dam to produce hydroelectric power. The resulting Lake Zoar is the fifth largest freshwater body in the state. The settlers who had used the land for dairy farming had deserted much of it as better farming land became available elsewhere.

The State of Connecticut purchased 455 of the 605 acres in Kettletown in 1950 with funds left by Edward Carrington of New Haven, which he had dedicated to the acquisition of public land in the Naugatuck Valley.

Much has happened to Kettletown since the arrival of the early settlers. Today it exists in a more natural state for all to enjoy.