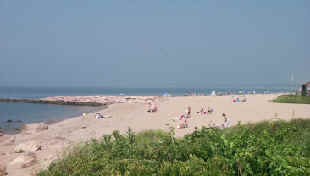 Bedrock (also called ledge) is not exposed anywhere in this park. Bedrock is the rock that is attached to the Earth - it can be seen in road cuts along I-95 and many other roads in Connecticut. The rocks at Hammonasset are all loose sediments, transported here by moving ice. They range in size from fine silt to large boulders. Large rocks appear at the surface only in two places in the park, along the shore at Meigs Point and in the woods to the north of the Meigs Point Nature Center, on the north side of the picnic area. The Cedar Island and Meigs Point trails follow along both of these sites.

Connecticut and Long Island Sound were covered with glacial ice at least a mile thick about 21,000 years ago. That ice continually moved south from its origin near Hudson's Bay in Canada. As it moved, the ice picked up loose material on the Earth's surface, from dust to house-sized boulders.  The ice moved continually, though very slowly. By the time the ice moved as far south as Long Island, NY, the temperature was warm enough that the front of the ice melted as fast as the ice advanced. Loose material frozen into the ice was dumped as the ice melted. This created a long east-west ridge of unsorted sediments, called a moraine. As the climate warmed, the ice melted faster than it advanced, so the ice front gradually withdrew north. About 19,500 year ago the ice front became stationary again as the climate temporarily cooled. This formed another moraine. Those two moraines now make up Long Island. The second one, the Harbor Hill-Fishers Island-Charlestown moraine, extended across what is now the mouth of Long Island Sound. As the ice again started melting to the north, the water collected behind this moraine to make Glacial Lake Connecticut, where Long Island Sound is today. When the water level became high enough, a natural spillway developed from the lake where the Race is today.

Then, about 17,500 years ago the climate cooled for a while, so that the ice front stayed along a line from Hammonasset through Ledyard to Queens River, RI. The ice was still moving south, but it was melting at the same rate, so sediments piled up along the front. This formed the Hammonasset-Ledyard-Queens River moraine. It is a double moraine, meaning there are two parallel moraines close together.

As the glacier was melting back, large amounts of water were flowing downhill from it, washing finer sediments into low-lying areas. This has resulted in sand and gravel deposits in the valleys of Connecticut, where lots of water was moving. On hilltops and flat areas the undisturbed glacial sediments are a mixture of all sized materials, called till. Here at Hammonasset, till underlies the soil at Meigs Point Nature Center, the picnic area behind the center and probably also under the salt marsh. Willard Island and the other smaller islands in the marsh are thicker areas of till. All of the campground east of Tom's Creek is underlain by sand, while west of the creek there is more till.

The most obvious sediments are the large boulders along the shore at the east end of the beach at Meigs Point. These are the coarser materials left from the moraine after the waves have been attacking it for a few thousand years. The finer materials near the water have washed out into the Sound, helping to make the beaches, while the huge boulders remain. But farther from the shore the fines still remain in the moraine, supporting a variety of vegetation. A close look at these rocks while walking along the Meigs Point trail will reveal a variety of rock types. Many are striped with light and dark minerals. These are called gneiss. Some of these bands are folded. These metamorphic rocks were once buried deeply, where they were subjected to intense pressure at high temperatures. Some rocks are pink and gray or black, with the large grains randomly arranged. These are granite, a rock which was once melted, then cooled slowly at some depth below the surface.

After walking through the boulders, head toward the trail where it is high above the rocks. In some places you will see the undisturbed moraine mixture of all sizes of material. 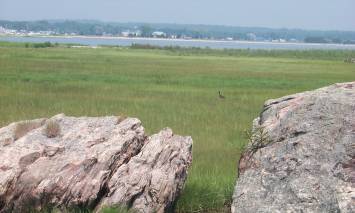 Figure 2. Erratics of the north moraine in the marsh.

A walk along the Cedar Island Trail through the woods leads to a boardwalk that ends in the marsh. Along the trail you will see occasional boulders. The marsh has several large boulders visible above the grass. This chain of boulders continues on out into the water. All of these are part of the north moraine. 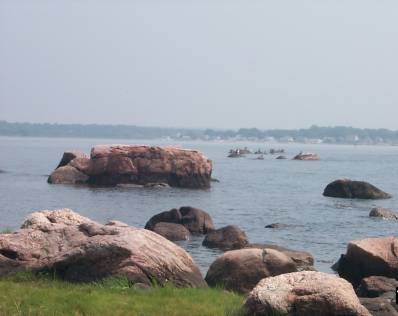 Figure 3. Rocks of the north moraine extend out into Clinton Harbor.