Atop the most southerly hill in a chain known as the Seven Sisters, William Hooker Gillette, noted actor, director, and playwright, built this one hundred and eighty-four acre estate, the Seventh Sister. The focal point of his effort was a twenty four room mansion reminiscent of a medieval castle.

Purchased by the State of Connecticut in 1943 from the executors of Mr. Gillette's will, Gillette Castle and the adjoining property with its fine woodlands, trails, and vistas are now administered for the enjoyment of present and future generations. This apparently would have pleased Gillette, since his will gave specific directions to see that the property did not fall into the hands "of some blithering saphead who has no conception of where he is or with what surrounded." This statement also points out the value Gillette placed upon his estate and the apprehension he felt about its disposition.

Gillette designed the castle and most of its contents personally, periodically checking every phase of their construction. Built of local fieldstone supported by a steel framework, it took twenty men five years (1914-1919), to complete the main structure. Gillette began his semi-retirement in his new home; and in the following years, he supervised the many thousands of refinements created by local craftsmen. 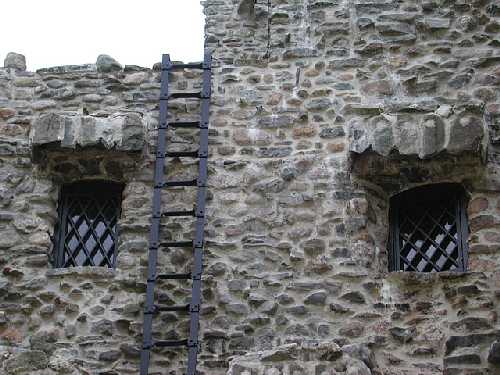 The woodwork within the castle is hand-hewn southern white oak. Of the forty-seven doors within the structure, there are no two exactly the same. And each door has a handsome external latch intricately carved of wood. Even the Castle's furnishings are indications of Gillette's inspirations. The built-in couches, a movable table on tracks, and light switches of carved wood all point to his creative genius.

Outside on the grounds, Gillette's influence is no less in evidence. The trails often follow, over trestle and through tunnel, the actor's three mile long narrow gauge railroad. Gillette's own walking paths were constructed with near-vertical steps, stone-arch bridges, and wooded trestles spanning up to forty feet. Other outdoor attractions include a vegetable cellar, the railroad station (Grand Central), and Gillette's goldfish pond.

Gillette was born in Hartford, Connecticut, in 1853, the son of former U.S. Senator Francis Gillette and his wife Elizabeth Daggett Hooker Gillette, a descendent of Thomas Hooker, the founder of Hartford. As a child, Gillette was captivated with the stage and acting pursuits, an interest that his parents did not encourage. At age thirteen, he reputedly had built a small stage and amused himself by frequently giving puppet shows for his friends. At age twenty, he left home to follow his chosen career; but success was slow in developing. He attended classes at numerous colleges including Trinity, Yale, Harvard, Massachusetts Institute of Technology, and College of the City of New York, but never received a degree. His first recognition as an actor was attained when the lead became ill in "Broken Hearts" at the Globe Theater in Boston, and Gillette's stand-in performance was well received. This led to other and better roles for Gillette. He is most famous for his portrayal of "Sherlock Holmes". Besides his activities as an actor and playwright, Gillette is known to have written two novels, invented many trick stage props and lighting techniques, and often produced and directed the plays in which he appeared. After his semi-retirement in 1910, Gillette was welcomed by theatergoers countless times during his four revival tours. His last performance was at the Bushnell in Hartford in 1936, the year before his death.