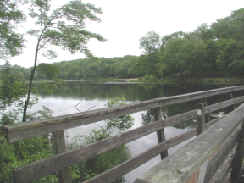 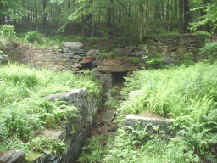 Gay City State Park is known for its lakeside beaches, however, the park reveals a significant amount of Connecticut geology as well. As you enter the park from Route 85, follow the park road and bear to the left where the road forks. At the end of the road is a small parking lot with an entrance to the white trail leading to the Mill Site. 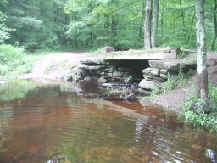 The first large structure on the white trail is an old mill site, located on the left side (Figure 1 and 4). The foundation of the mill can still be seen, as well as the chute that leads to the small stream that flows by. The foundation of the mill is predominantly built from gneiss, a high-grade metamorphic rock subjected to intense heat and pressure during formation. Gneiss is easily identifiable by the segregation of light and dark minerals giving it a banded texture.

At the pond, a new rock type is exposed (Figure 4). Amphibolite, a metamorphic rock that forms under intense heat, pressure, and by the action of hot fluids, is exposed as boulders near the pond. Originally, amphibolite was probably either basalt or shaly limestone, before metamorphism. The dark mineral present in amphibolite is amphibole, an elongate black splintery mineral (Figure 3). Some of the amphibolite boulders have pegmatite veins (Figure 3). Pegmatite is an igneous rock that formed from molten rock buried deep below the surface of the Earth. Since the molten rock was well insulated beneath the surface, it cooled very slowly, allowing the crystals to grow very large. In fact, pegmatite crystals can reach lengths of up to 12 m. Generally small, pegmatite intrusions usually have the same composition as granite, only coarser. Furthermore, pegmatite intrusions are of great interest to mineral collectors because they may contain a variety of rare minerals. This pegmatite contains quartz, biotite, muscovite, and feldspar.

After observing the amphibolite, you will begin hiking on the red trail. Along the red trail there are several outcrops and boulders of gneiss. Most interestingly, a large gneiss outcrop is on the right hand side of the trail, which has parallel fractures. The fractures produce clean breaks that give the rocks a boxlike shape (Figure 5). 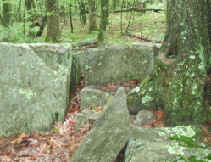 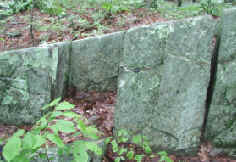 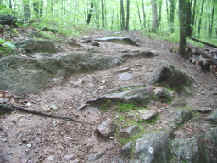 Continuing down the trail you will see an outcrop of schist protruding onto the trail (Figure 6). The schist is part of the Collins Hill Formation. Schist is a type of metamorphic rock that has undergone intense heat, pressure, and hot fluids. By definition, schist contains more than 50% platy and elongate minerals such as mica and amphibole. This high percentage of platy minerals allows schist to be easily split into thin flakes or slabs. This schist is rusty and contains biotite, muscovite, garnet, and can easily be broken (Figure 7). 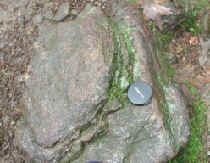 As you make your way back onto the white trail you will encounter more gneiss right before a large pond. There is a man made waterfall and beach along the pond (Figure 8 and 9). The sand has been brought into the park and is mostly quartz and feldspar. The parking lot near the beach is lined with large boulders, most likely brought in from the Glastonbury Gneiss Formation, which is not exposed in this park. 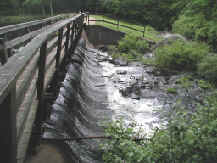 Figure 8: Man made waterfall at end of pond

The other trails lead you through swampy areas on the outskirts of the park. There are very few exposed outcrops or boulders along these trails. The trails will lead you through a densely wooded area and across many small streams. 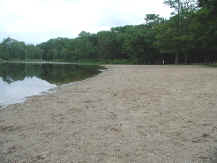