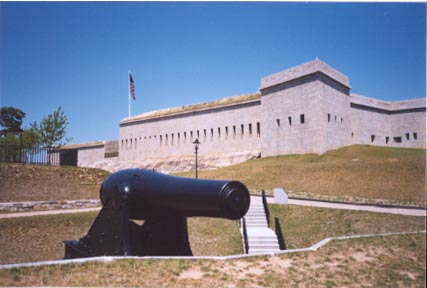 Fort Trumbull State ParkSince Colonial times Fort Trumbull served as the location of various military forts, schools and research facilities for the United States Army, Coast Guard and Navy. The first Fort Trumbull was built to protect the New London Harbor from British attack and later served as part of the country’s coastal defense system. The masonry fort (the third) that stands today was constructed between 1839 and 1852.

By World War II Fort Trumbull had become home to the Coast Guard, the U. S. Maritime Service Officer Candidate School, and the Columbia University Division of War Research Underwater Sound Laboratory was established there.

In 1970 the Navy merged the Underwater Sound Laboratory at Fort Trumbull with the Underwater Weapons Research and Engineering Station, at Newport RI, forming the Naval Underwater Systems Center (NUSC).

The Battle of Groton Heights and The Burning of New London