The Farmington Canal, also known as the New Haven and Northampton Canal, stretched 84 miles from Northampton, Massachusetts to New Haven, Connecticut. The kickoff for this ambitious project was held on the fourth of July 1825. But the canal companies were a bit late getting underway. By the time of the Farmington Canals’ groundbreaking in 1825 the 363 mile long Erie Canal in New York was already complete. None-the-less, the ground breaking initiated a new transportation era in the state and Connecticut’s entry into the national canal craze was underway.

By 1828 the first sections of the canal were in use and the parade of people and commerce began. The canal boats were moved along by their “one horsepower” engine; that is, young boys who led mules along the pathway, or flat topped berm, along one side of the canal with a rope adjoining the boat. This berm was a solid bank of earth with a sufficiently wide surface and was called the tow path.

By the late 1830s the canal was complete. Some years were better than others. Wet years enhanced the water supply for the system. Droughty years saw sections close down. The canal had a solid impact on local businesses and industries that adjoined it. Farmers, clockmakers, miners and many more tradesmen of the day enjoyed expanded markets for their goods along the canal’s path. Local children found great summer amusement through fishing and swimming in the four foot deep waters and had winter fun by skating for miles over the frozen waterway.

There was significant elevation change from Massachusetts to New Haven and these step-downs, or step-ups depending on direction of travel, were accomplished with the use of locks. 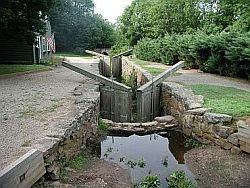 The early and mid 1840s saw good years when there was sufficient water and no washouts. Commerce annually was measured in the millions of pounds of goods transported. But railroads were looming on the horizon. Unaffected by rainfall and thus more reliable and ultimately more rapid, rail transportation made its inroads and incrementally the canal was phased out of business. 1847 was the last full year the canal company did business.

The rail companies bought the canal rights-of-way and used the existing towpath for their rail beds. This new railroad era dated from the late 1840s through the 1980s when the railroad rights-of-way were abandoned. Since that time a varied group of sponsoring organizations has guided the growth and success along today’s canal trail corridor. Thus the present multi-use recreation trail is the third iteration of use for this line.

Today, the Farmington Canal State Park Trail is pided into two parts. The multi-use trail is 5.5 miles long and extends from Cornwall Street in Cheshire south to Todd Street in Hamden. The Canal Trail is an entity unto itself and not part of the local road system, but users should be aware of the numerous road crossings.

Todd Street marks the southern reach of the state park property but the multi-use trail continues south from there as municipal property. An additional 3.9 miles in north central Cheshire, from Route 68 to Interstate-691, is also part of the park but is not yet developed for recreation.

Where the trail is complete and when the weather is good thousands of people make daily use of it. In their travels walkers, joggers, bicyclists and skaters pass the remnants of the old canal bed, and the ruins of its locks and retaining walls.

Each season offers today’s trail users something different; a greening in the spring with emerging leaves and wetland plants; thick rich shading foliage in summer; the full spectrum of fall colors in autumn; and open vistas with frozen rock wall seeps in winter. But whatever the time of year this special reminder of Connecticut’s past provides a tranquil get-away for everyone who wishes to enjoy its serenity.