The Connecticut Valley has a long history of fossil track discoveries. Outstanding specimens uncovered in 19th century brownstone quarries found their way into museums throughout the world. A new chapter in the history of such discoveries was written in 1966 when thousands of tracks were exposed in Rocky Hill. This remarkable site became Dinosaur State Park.

The site contains more than 2,600 individual dinosaur footprints. Most of which are classified as Eubrontes Giganteus. After the discovery, the original plan was to build a large exhibit center over the main trackway. However, due to budget constraints, the structure was not built. In order to preserve the main trackway, they were reburied in 1976 and remain that way to today.

Only about 1/3 of the tracks remain exposed in the current domed exhibit center built around 1980.

The below video documents the 2011 uncovering of a portion of the dinosaur trackway at the park in Rocky Hill, Connecticut.  Archival footage from the original discovery is showcased along with present day interviews at the visitors center. It is the continued hope that enough funds can be raised to expose the main trackway and build an additional exhibit center over this section to showcase the approximate 2,000 tracks that have not been studied since 1976.

Dinosaur State Park is a popular tourist and educational destination. The videos below are episodes from 'The Outdoor Enthusiast' and 'Lauren's Crazy Pet Show". They highlight some of the activities and things to see on your visit to the Park. 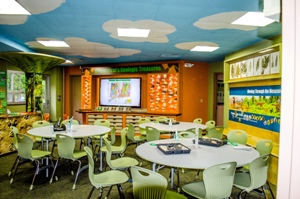