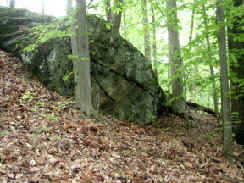 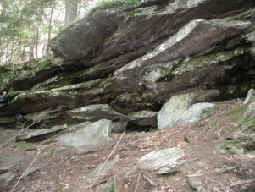 A good example of glacial plucking occurs along the orange trail. After crossing the covered bridge, follow the trail to the right. About 300 feet after entering a grove of hemlocks turn down toward the river and walk between the river and a ledge. The rock here is a gray, medium-grained layered gneiss and schist. Watch for small folds some places in the rocks. Large chunks of rock were broken off here by the glaciers as they froze to the rocks during the winter, and then broke the rock off as they started to move in the summer (Figure 1). Although this is on the east side of the ridge, plucking is a common occurrence on the south ends of hills, which formed many south-facing overhangs. Early Native Americans used these overhangs for shelters, as they were warmed by the lower sun in the winter and protected from the higher sun by the overhang in the summer.

Some larger folds can be seen below the dry falls to the east of Chapman Falls. The dry falls are located by taking the orange trail to the left after crossing the covered bridge. A trail branches off of the orange trail to get to the falls. Although no water normally flows over this falls now, from the smoothness of the rocks, it is obvious water used to flow over this area (Figure 2). 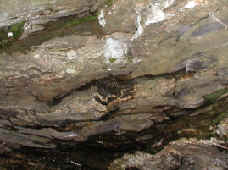 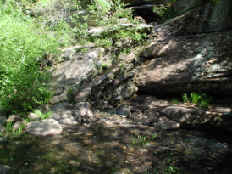 Figure 2: a) Fold in ledge near plucked rocks  b) large fold seen below the dry falls.

The overlook, reached from a short trail off of the orange trail, gives a spectacular view to the south along the valley (Figure 3). This is one of hundreds of north-south valleys formed all over Connecticut at the time Europe and Africa ran into North America, folding the rocks into north-south ridges perpendicular to the collision direction (Figure 3). This valley has been steepened and widened by the southward movement of glacial ice, giving the valley the characteristic U-shape of a glacially modified valley.

Figure 3: View from the overlook of u-shaped valley.

The green trail has nice examples of pegmatite boulders. The pegmatite boulders are spaced approximately 30 feet apart along the trail. Pegmatite is an igneous rock that formed from molten rock buried deep below the surface. Since the molten rock was well insulated beneath the surface of the Earth, it cooled very slowly, allowing the crystals to grow very large (Figure 4). 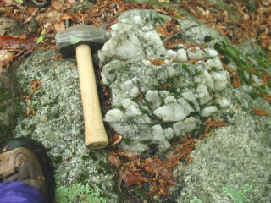 In addition to pegmatite you will also find schist boulders that are located directly across the trail from the pegmatite. Schist is a type of metamorphic rock that has undergone intense heat, pressure, and hot fluids. By definition, schist contains more than 50% platy and elongate minerals such as mica and amphibole. This high percentage of platy minerals allows schist to be easily split into thin flakes or slabs. Farther down the trail you will encounter a schist outcrop, this outcrop serves as the source for the several schist boulders along the trail. The schist boulders and outcrop contains large amounts of biotite mica, this gives the rocks their dark coloring (Figure 5). 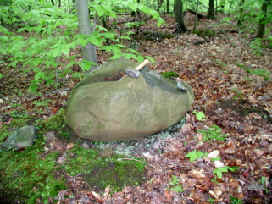 In addition to seeing schist and pegmatite in Devil's Hopyard, you may also encounter gneiss (Figure 6). Gneiss (pronounced "nice") is a high grade metamorphic rock subjected to intense heat and pressure during formation. Gneiss is easily identifiable by the segregation of light and dark minerals giving it a banded texture. Gneiss usually consists of mostly elongated and granular, as opposed to platy, minerals. At Devil's Hopyard it is difficult to see the banded layers within the gneiss. 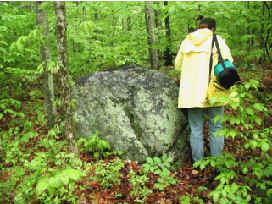 Just west of the Nature Center on Mitchell Road, a trail circles the pond. As you enter the woods, there is a vernal pool on the left. Vernal pools usually dry up during the summer, but you may see water in wetter periods.

Farther down the red and white trail a large boulder on the right has narrow bands of ridges parallel to the ground. These ridges demonstrate differential weathering. The rock is layered and the layers made up of more resistant minerals are weathering slower than the less resistant mineral layers, resulting in parallel ridges (Figure 7). This is a boulder that was moved to this location by a glacier from the north. A blind along the edge of the pond provides a good site for observing pond activities. 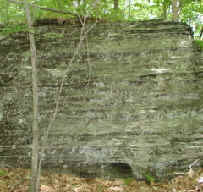 The beginning of the red trail, near the falls, contains amphibolite gneiss; a black rock found in the trail. It contains tiny, black needle-like grains of hornblende. 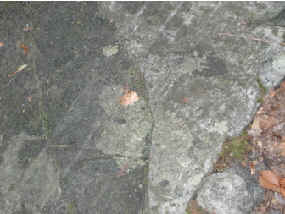 Figure 8. Banded amphibolite not far along the red trail. 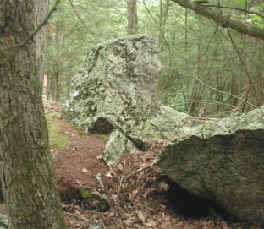