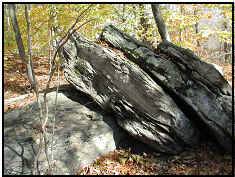 Day Pond has a nice swimming beach and picnic area. In addition, there are several short trails within the park and two long trails which go into the adjacent Salmon River State Forest. During hunting season, be careful about walking the trails in the state forest, as hunting is allowed there, but not in the state park

To begin the geologic exploration of the Day Pond, cross the dam, and then follow the blue trail to the left. The abundance of boulders in the woods indicate this area is covered with till, the unsorted material left behind by the glaciers. Till contains grain sizes from microscopic clay grains to boulders as large as houses. Till is generally found on the hilltops, while stratified drift is found in the valleys, where heavy melt water from the glaciers sorted the materials into deposits of similar sized grains. Natural sand and gravel deposits thus occur in valleys.

After crossing a small stream, about 500 yards down the trail, look for a large rounded outcrop to the left. This is Brimfield Schist, a rusty weathering, dark gray schist commonly composed of biotite (the black mica), quartz and feldspar. Here it also contains a few small garnets. The glaciers rounded the outcrop so it is steeper on the south end than on the north. This is commonly seen in both outcrops and entire hills in Connecticut, caused by the motion of the ice from north to south. Glaciers covered all of Connecticut from about 26,000 years ago to 12,000 years ago.

Some light-colored boulders are found along the trail near here. They are very coarse-grained and generally light in color. The major minerals are quartz, feldspar and mica. The coarse boulders are called pegmatite. There were once molten rock deep within the Earth, which cooled very slowly, thus allowing time for large grains to grow.

When you reach the buried cable signs, walk uphill to your right about 50 feet. The freshly broken pieces of black and white banded rock are Hebron Gneiss (pronounced "nice") (Figure 1.). Gneiss had its mineral grains sorted into dark and light bands by increased heat and pressure during metamorphism. 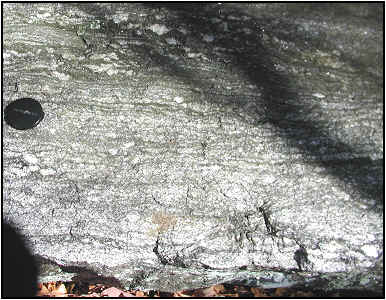 Figure 1. Notice the black and white horizontal banding in this piece of Hebron Gneiss. Lens cap for scale. 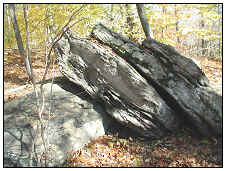 Figure 2. Loose schist and gneiss boulders lying on another boulder. Notice the differential weathering which causes some layers to stick out farther than others.

If you continue walking down the blue trail, be sure to stop when you reach the park boundary if you are there during the hunting season, as hunting is permitted in the surrounding Salmon River State Forest. Walking back up the blue trail, watch for a nice waterfall over bedrock. After the cable-crossing look for some tilted boulders resting on others. These boulders are a good example of differential weathering. Because some layers are made up of harder minerals than others, the harder layers erode slower, thus they stick out more than the softer layers (Figure 2). The softer layers here are schist. The harder layers are gneiss, but finer-grained than seen earlier. 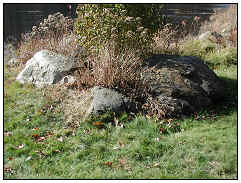 Figure 3. Pegmatite, gneiss and schist boulders together beside the pond near the pavilion.

Back at the beach, walk down to the water directly behind the pavilion. The group of rocks there is made up of the three rock types you will see in the park (Figure 3). The white boulders are pegmatite. A quartz vein cuts through one of the pegmatite rocks. Also in the group is a piece of very dark, rusty Brimfield schist, made up of platy minerals, mostly micas, all aligned in the same direction. The third type of rock is a piece of Hebron gneiss, made up of black and white bands. Someone in a wheelchair, with a little help, could reach this outcrop. 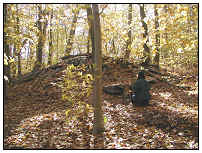 Figure 4. This outcrop of Brimfield Schist makes a small mound in the woods. Human for scale. The outcrop is located near post 8.

From the pavilion, follow the yellow trail to the left. You will soon see a large boulder of Brimfield Schist with ferns growing on top. Continue on along the trail to see outcrops of Brimfield Schist. Outcrops are rock actually attached to the Earth, not boulders which were moved to their present location by ice or humans (Figure 4). 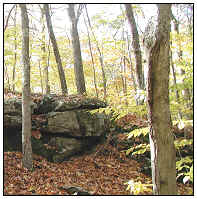 Figure 5. The loose, angular pieces on the right side of this photo were plucked off by moving ice between 26,000 and 12,000 years ago.

Across the trail from post 1 an outcrop of Brimfield Schist has a number of loose pieces lying close to one end (Figure 5). This is an example of glacial plucking. When glaciers covered Connecticut between 26,000 and 12,000 years ago, there was some melting in the summer. Water then filled fractures in the rock. When it froze it expanded, breaking off sections of the rock. As the ice moved south, it pulled these loose pieces away from the main rock, sometimes leaving them nearby. These angular pieces of rock suggest they were moved only a short distance away from the nearby rock.

In upland areas like this, glacial till stayed in place when the ice melted, similar to what happens with plowed snow when it melts and leaves piles of sand and gravel beside the road. Figure 6 is a typical photo of upland till.

Figure 6.  Notice the abundant boulders mixed with the finer materials hidden under the leaves. On top of the till is usually a thin layer of soil, built up by years of organic deposits and the breakdown of the rock material.