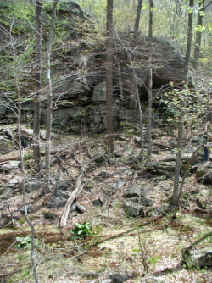 All of the bedrock (ledge) found in the park is a hard, light-colored granitic-type rock called the Monson Gneiss. Originally it was a granitic igneous intrusion formed at the edge of the North American continent as the Iapetos Ocean, which was roughly in the area now occupied by the Atlantic Ocean, was being forced down under the North American continent. Africa and Europe/Asia were moving toward North America. As the ocean floor plate was subducted under the continental plate, some of it melted and forced its way toward the surface. The rock we now see as the Monson Gneiss was the molten material in the magma chamber, which didn’t make it to the surface and slowly cooled to form a granitic pluton. Later, as the Iapetos Ocean continued to close, either a microcontinent or Africa collided with North America and the pressure and high temperatures produced during this collision and subsequent folding of the rocks caused the metamorphism of the former granitic pluton. Millions of years of erosion of the overlying rocks has now exposed this rock, the Monson Gneiss, at the surface. 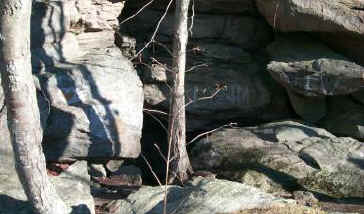 Figure 1. The Monson Gneiss is light-colored, and looks the same everywhere in the park. In some places it is covered with blue-gray lichens.

Gneiss is a metamorphic rock, which means it formed at great depth where pressures and temperatures were much higher than here on the surface. As the rock reaches the surface due to erosion of overlying rocks, the pressure is released and the rock tends to break in many places. Tree roots widened these fractures, as did water freezing in them and expanding. Glacial ice flowing over the rocks moved some of them. Those rocks moved only a short distance are still angular, just as they broke originally, while those moved a longer distance become more rounded as their corners and edges are broken or ground off. 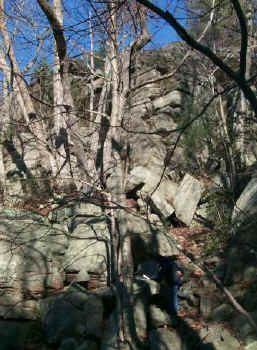 Figure 2. Some of the angular rocks plucked off by the glacier can be seen near the center of this picture.

For a detailed description of the geology of the park, follow the Chimney Trail, blazed in green. Begin near the Nature Trail, on the south side of the road. Almost immediately the trail encounters a large outcrop of Monson Gneiss. This large gneiss outcrop contains a number of small rock-fall caves, one with two entrances. Some of these may have been used as shelters by native Americans. The trail climbs over the south end of the outcrop then runs along its eastern side before crossing the road. Notice all of the fractures in the rock.

The Chimney Trail has large amounts of exposed bedrock (also called ledge), all of it named Monson Gneiss (pronounced "nice"). It is a medium- to coarse-grained rock, light in color, made up mainly of the minerals plagioclase, quartz and biotite. In some places there are traces of garnet, epidote or magnetite. If you look closely at this rock, so that you get used to how it looks, you can then try to find loose boulders of other rocks in the park. These loose, rounded rocks were moved here by glacial ice between 24,000 and 16,000 years ago. Many of these rounded rocks, called glacial erratics, are also Monson Gneiss, as the ice usually didn't move rocks very far. But you may find a few other rock types. 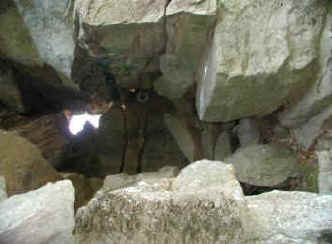 Figure 3. Cave in large outcrop at beginning of Chimney Trail, in Monson Gneiss.

Follow the Chimney Trail on across the road, through the woods and over the bridge. The next large outcrop also contains some small caves, including one the trail goes through. 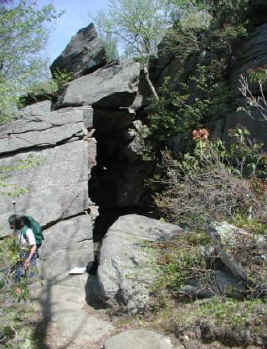 In the area of Figure 4 you can see some banding in the rocks, caused by the concentration of different minerals into layers during metamorphism. Because some of the minerals are harder than others, differential weathering has caused these harder layers to stick out of the rock more than the softer layers. There is also a pegmatite vein here, a narrow band of course-grained lighter colored rock which formed when some of the minerals in the rock melted during metamorphism and was injected into a weak zone in the rock. Each mineral has its own melting temperature, and those with lower melting temperatures, such as quartz and feldspar, sometimes melt during high temperature metamorphism. 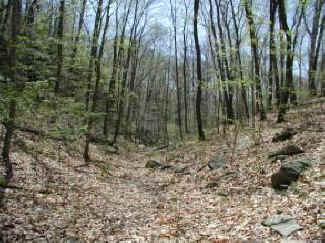 After leaving the rocky outcrop, the trail traverses wooded areas. Sometimes it crosses long, narrow valleys. These valleys trend north-south because as the collision between North America and the European and African continents took place, the land was folded like an accordion into north-south hills and valleys. This has made travel in Connecticut much easier in a north-south direction, but less so in an east-west direction, which requires constant ups and downs. 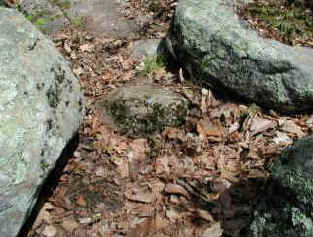 Figure 6. The rock in the center of the picture, with the coin on it, is Portland Arkose.

Rounded rocks found in the forest, especially away from outcrops, were deposited here as the glacial ice melted around 17,000 years ago. Rocks moved by water or ice lose their sharp edges and corners from abrasion and become rounded. These rocks which the glaciers moved are called erratics. Most of the erratics in the park are Monson Gneiss, but sometimes you may find a rock which looks different. At one point along the Chimney trail a reddish-brown rock containing small pebbles can be found. It is a piece of the Portland Arkose which is found to the northeast of Chatfield Hollow, in Durham and farther north.  Portland Arkose was quarried in Portland for many years and shipped all around the United States, even to California, to be used as the building stone called "brownstone". The piece seen in the picture is a little hard to identify because of its moss and lichen covering, but a careful examination will reveal the small pebbles it contains. Arkose is a type of sandstone, a sedimentary rock made by the cementing together of grains of sediments.