Rock Types Found Along the Trail 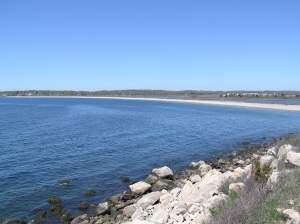 Bluff Point State Park and Coastal Reserve occupies a peninsula projecting into Long Island Sound. It is bounded by the Poquonock River on the west, Mumford Cove on the east and Fishers Island Sound on the south. A railroad track bounds the park on the north. Within the park landforms vary from beach to marsh, to brackish lake, to wooded uplands.

Both surficial and bedrock geology can be studied here.

Glaciers covered all of Connecticut on at least two occasions, leaving behind deposits of sorted and unsorted silt to boulder-sized sediments -- the surficial geology. Since the last ice left Bluff Point about 17,500 years ago, water has been moving around much of the debris left behind. The beach is made up of a combination of sand- to gravel-sized particles left behind by the glaciers and others eroded from the rocks making up the bluffs. Figure 3 shows how sand grains migrate along a beach due to the movement of the waves. The waves and wind also sort the grains by size. Where waves are larger, pebbles may be deposited and the smaller grains removed. Smaller waves and the wind will deposit sand. Density determines where sand is deposited. Sometimes the beach contains areas of red or black sand. The red sand is garnet, and the black sand is magnetite. Both are denser than quartz, which makes up most of the finer material. Take a magnet to the beach and you can collect magnetite, as it will cling to your magnet.

Sand at Bluff Point generally moves from east to west. The beach would probably extend over to the airport area if the Poquonock River didn't move the sand out into the Sound. At one time the beach did extend to Bushy Point, but the 1938 hurricane breached the beach, separating it from what is now Bushy Point Island, at least at high tide. The beach is now a spit. When it was connected to the island it was a tombolo. Since beaches are constantly changing, due to wind and waves, the beach may at some time again be connected to the island. Or another storm could breach the spit of sand and break it into more islands.

Figure 3. Waves frequently come into a beach at an angle. The water then drains down the beach perpendicular to the slope. This results in sand grains moving along the beach in a longshore current. A sand grain that starts at point 1 can end up at point 2. Thus the sand is constantly redistributed along the shoreline. 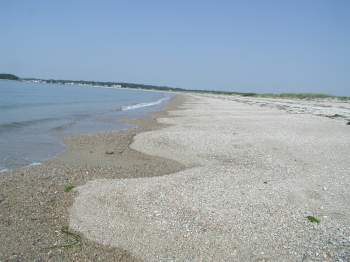 Figure 4. A summer view of the beach at low tide. Notice its curved shape and rhythmic features. The dunes are visible behind the beach.

The shape and width of the beach varies due to storms and seasons, as well as tides. Winter storms tend to bring higher waves than summer ones and carry away more sand. These larger waves tend to carry away the finer materials, making the beach coarser. They also steepen the beach. If you visit the beach several times in different seasons, you will probably see these differences. Seasonal changes in beach shape and texture are normal and recurring.

Most of the beach rises away from the Sound to small sand dunes piled up by the wind, stabilized by grasses and other plants (Figure 4). These help to keep waves from washing into the small pond and marsh behind the dunes. The plants are necessary to keep the dune sands in place, so please cross the dunes only on the boardwalks.

After you have explored the beach, walk east toward the cliffs. You will notice that the beach turns to boulders as you reach the east end (Figure 5). The black "stains" on them are a type of algae. Most of these boulders have eroded off the cliff due to wave action. Not only do the waves crash against the cliff rocks, but water freezes in cracks, expanding to push the rocks apart. Even salt water that evaporates in the cracks expands as the salt crystals grow. Chemical weathering also occurs, as some minerals such as feldspar gradually weather to clay minerals. Over time the rocks break up. This is a natural process that will continue as long as water reaches the rocks. Even inland rocks break up over time as a result of water freezing in cracks or tree roots growing into cracks and pushing them apart. 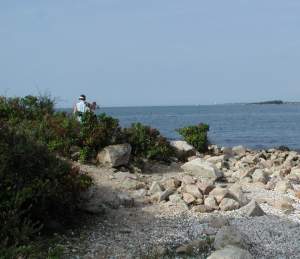 Figure 5. The beginning of the rocks at the east end of the beach. These rocks broke off the cliffs, then were moved by waves. If you look at the rocks carefully, you will find they are mostly the same kind of rock and match the bedrock found on around the point to the east.

From the beach the main trail climbs the bluff for spectacular views of the Sound with Fishers Island in the distance. Because the bluff here is covered with sediments, it is difficult to see the bedrock. But when the trail heads inland, if you take one of the smaller trails down to the beach, you will begin to see that this point is all bedrock (Figure 6) 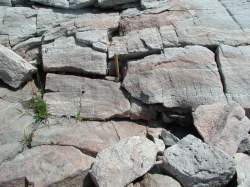 Figure 6. This gray and pink-banded gneiss is known as the Hope Valley Alaskite Gneiss. The 600 to 700 million-year-old rock contains mainly feldspar, quartz and plagioclase, with minor amounts of magnetite (the source for the magnetite sand), biotite and muscovite. All of the bedrock at Bluff Point is about this same age, although it does not have the same chemical, and thus mineral, composition.

This same rock makes up an outcrop you passed in the woods if you followed the lower trail to the beach, but there it is covered with lichens, so is difficult to see. Here the salt water keeps lichens from growing on the rocks, yet doesn't cover them often enough for the dark algae to grow on them. It is unusual in our climate to find such a good outcrop, as lichens and moss particularly like rocks

The lichen-clear rocks present an opportunity to study changes within a metamorphic rock. This rock has undergone high temperature and pressure changes since the rock originally formed, allowing the mineral crystals to grow in new orientations and size, without ever melting. Metamorphism requires a very long time. Follow some of the bands and see how they curve. In many places there are veins of one or more minerals cutting through the rock (Figure 7). There is at least one old fault exposed, a place where the rock broke and moved (Figure 8). 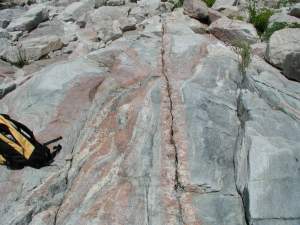 Figure 7. A vein of pink feldspar and white quartz cuts across other layers. Black and white layers above the backpack are folded.

Spend some time looking at all of the different patterns to be found in the rock. Remember, all of the folds happened when the rock was very hot, under a lot of pressure because of deep burial in the Earth, and over a very long period of time.

Split Rock is the large, split boulder sitting on top of the nearly flat surface (Figure 9). It was probably moved to its present location by the glaciers, but since it is the same rock type as the rock it sits on, it is not considered to be a glacier erratic. 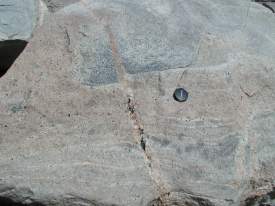 Figure 8. Movement has occurred along this break, offsetting the gray layer at the top of the boulder. That makes this a fault. 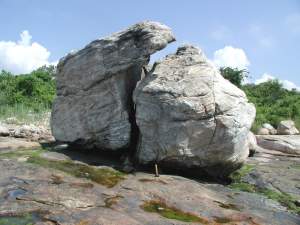 Figure 9. Split Rock. According to old stories, one very cold night during the winter of 1779 - 80 the rock split with a loud sound like a cannon shot. Whether that is true or it split during transport or deposition by glacier ice, the two parts were once one rock.

Walk up the cliff to the main trail/road. Follow it into the woods back toward the parking lot. Turn left at the sign for "Sunset Rock". This is probably an erratic, as it seems to be a different rock type than should be in this area, although the lichens make it difficult to be sure without breaking off a piece (please don't). The rock got its name from the sunset views that used to be visible from here when this area was covered with cottages instead of trees.

Figure 10. Bluff Point map of surficial materials, the materials left behind by the glaciers (except for the modern beach) (Stone et al., Surficial Materials Map of Connecticut, USGS, 1992).

Return to the main trail and continue toward the parking lot. As you walk through the forest you will see boulders here and there. These were left behind by the glaciers that once covered all of New England. As they slowly moved south, loose soil, sand, gravel, and boulders were frozen into the ice. When the ice eventually melted, that material was left behind. In valleys, water moved the sediments around, sorting them by the action of the moving water. As a result, sand and gravel deposits are found in valleys and till, a mixture of materials just sitting where it dropped, covers the hills in New England. As you start walking from the shore back toward your car, you are walking through till. Notice the red areas on Figure 10, representing glacial moraine. There the front of the glacier, where most of the melting was occurring, was stationary for some period of time because the glacier continued moving southward as fast as it was melting. A large amount of debris was left here as the ice melted. The moraine is identified by a heavier concentration of large boulders in the woods, especially between the two main trails, more than half way back to the parking lot after leaving the southernmost end of the point (Figure 11). You also pass through the moraine on your way to the beach along the water trail, but the vegetation usually obstructs the view. 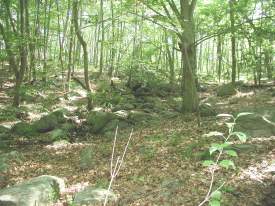 Figure 11. Boulders in the moraine along the trail back to the parking lot.

Another rock unit, the Mamacoke Formation, can be seen along the trail which heads east from the parking lot, in front of the restrooms. Follow the main trail until you see outcrop in the woods south of the trail. This gray rock is also metamorphic and gneiss, but has indistinct layering in most places. Its major minerals are plagioclase, quartz and biotite, but in some areas it also contains minor amounts of sillimanite, garnet, hornblende and microcline. Some outcrops also contain layers of quartzite, which is mostly quartz, and amphibolite, which is mostly amphibole.  Both are metamorphic rocks.