(HARTFORD)—The Connecticut Department of Energy and Environmental Protection (DEEP), the Connecticut Urban Forest Council (CUFC) and the UCONN Department of Natural Resources and the Environment & Center for Environmental Sciences and Engineering are pleased to announce the Urban Forest Equity and Resilience Grant Program, available to municipalities and non-profit organizations in Connecticut seeking to implement statewide urban forest canopy improvements called for in the 2021 Governor’s Council on Climate Change (GC3) Report and the 2020 Forest Action Plan.

According to a recent study by researchers at the Nature Conservancy, 92 percent of low-income blocks in the U.S. have less tree cover and hotter average temperatures than high-income blocks. Five of the ten worst discrepancies in the US were found in Connecticut, and low income and communities of color with low urban tree cover are among the most vulnerable populations to climate change and its impacts.

Investments in canopy cover can help to offset the impacts of climate change and urbanization including the urban heat island effect. Cities such as Hartford, for example, can experience temperatures up to 19 degrees hotter than nearby rural areas. Urban trees help to counter the urban heat island effect by cooling ambient air temperatures which translate to reduced energy usage/costs and improved health outcomes.

“The urban heat island effect leads to disproportionate impacts felt by our urban residents, which during a heatwave, can range from discomfort, to serious health problems, and even death,” DEEP Commissioner Katie Dykes said.  “With an average of 25 days annually above 90 degrees projected for Connecticut by 2050—up from an average of 5 annually before the year 2000—it is imperative that we invest in urban forestry to mitigate this problem. More trees means cooler temperatures and less air pollution. This program implements recommendations of the Governor’s Council on Climate Change that prioritize equity and environmental justice in our response to the climate crisis.  I’m grateful to our Urban Forestry team at DEEP and our partners at CUFC and UConn for putting this recommendation of the Governor’s Council on Climate Change into action.”

1.     Urban Forestry –enhance, increase, and improve local tree canopy cover through the planting, management, and post-establishment treatments of trees. This may include maintenance of mature and large trees that provide high levels of ecosystem services such as cooling, pollution reduction, and habitat.

2.     Climate Change – reduce the effects of climate change and/or mitigate factors that contribute to climate change. Specially, the storing and sequestering of carbon, offsetting the urban heat island effect, and increasing resilience to more frequent and intense weather events.

3.     Environmental Justice and Equity – redress disparities in canopy cover and socio-economic status by investing in underserved communities, especially those that are most vulnerable to the impacts of climate change.

4.     Community Involvement – demonstrate that community interests and needs are at the forefront of any proposed project.

Expected outcomes from these projects include increased and improved condition of urban and community forests throughout the state; enhanced resilience to climate change and its impacts; increased engagement in and stewardship of urban forests, especially in communities that have historically been underrepresented in urban and community forestry programming; reduced exposure to climate and environment-related health hazards among vulnerable populations; and increased capacity in municipalities and non-profit organizations to continue to pursue and carry-out future urban forestry projects and programs.

“Having trees in a neighborhood goes well beyond aesthetic appeal: their shade significantly lowers temperatures, making communities safer and more comfortable—and saving lives—amid heat waves exacerbated by climate change, said Drew Goldsman, Urban Conservation Director, The Nature Conservancy in Connecticut. “But tree cover is distributed unequally, with low-income neighborhoods having far fewer trees than their high-income counterparts in 92 percent of US communities, and some of the most extreme disparities are right here in Connecticut. The Nature Conservancy in Connecticut applauds the Connecticut Department of Energy and Environmental Protection, in collaboration with partners like UCONN and the Connecticut Urban Forest Council, for its new urban forestry grant program designed to address these inequalities.”

For more information on the grant program, including criteria and how to apply, go here.

Connecticut has received over $198.5 million in auction proceeds since the program's inception in September 2008. 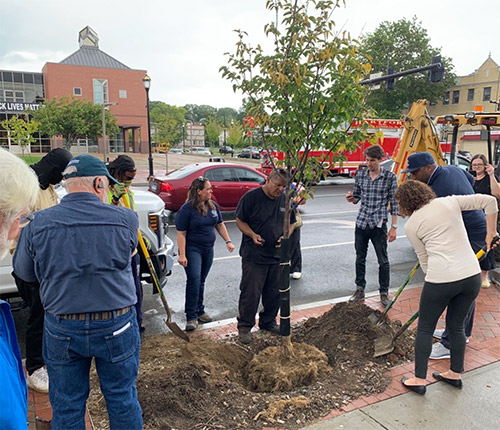 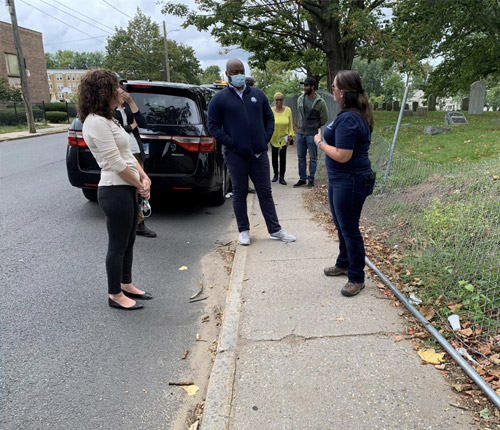 DEEP Commissioner Katie Dykes and Gov. Lamont's Chief of Staff Paul Mounds speak with City of Hartford Forester Heather Dionne during a tour of tree canopy cover in the city.