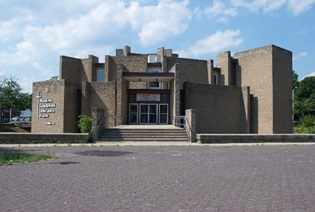 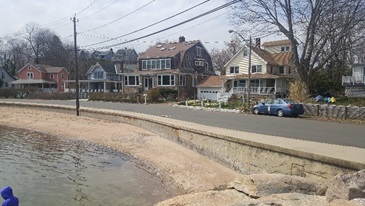 Architectural historians from R. Christopher Goodwin & Associates, Inc. (RCG&A) surveyed areas up and down the coast of Connecticut on behalf of the SHPO, and produced a raft of National Register nominations, survey reports, recommendations for future nominations, historic context reports, and historic resource data that can inform state and local preservation planning and assist the SHPO with post-disaster responsibilities.

“Over the last several years, RCG&A has been honored to support the CT SHPO in the identification, evaluation, and stewardship of historic properties in coastal Connecticut,” said Kathryn Kuranda, senior vice-president at RCG&A who oversaw many of the firm’s projects in Connecticut. “This ambitious effort included architectural survey and National Register nominations with emphases on vulnerable resources, including underrepresented twentieth century resources. Preservation plans also were developed that meaningfully integrate heritage resources in resiliency planning and disaster recovery. All products advance the preservation of Connecticut’s heritage for current and future generations.”

RCG&A researched ten individual properties and nine historic districts in preparation for nomination to the National Register of Historic Places, as well as properties for a multiple-property “thematic” nomination. The properties are in cities and towns in all four coastal counties, including Old Saybrook, Greenwich, Stonington, Branford, Old Lyme, Westbrook, Middletown, New London, Milford, Stamford, and New Haven.

The nominations were selected in consultation with the SHPO, which prioritized resources in shoreline communities that had suffered Sandy damage or resources that were otherwise environmentally vulnerable and were of interest to preservation partners, constituents, and property owners in local communities.

Nominations of individual properties or historic districts can give property owners the chance to obtain tax credits when they renovate structures in keeping with the Secretary of the Interior’s Standards (or, as in the case of Hurricane Sandy post-disaster relief, opportunities for grants). In addition, the documentation and designation of historic buildings, districts, and neighborhoods through makes local governments more aware of these resources and can assist with local planning efforts, including hazard mitigation and emergency planning.

After an initial survey of coastal resources, and after determining interest from local planners and preservationists, the SHPO authorized architectural surveys in seven neighborhoods in coastal Connecticut. Architectural historians from RCG&A surveyed these areas, in large part to expand the SHPO’s understanding of coastal historic resources, particularly those vulnerable to natural hazards and sea level rise. This helped fill a gap in the state’s inventory that had become clear after Hurricane Sandy. Another goal was to evaluate whether buildings, structures, or potential districts might warrant nomination to the National Register as historic districts or individual properties.

The survey amassed physical information about the neighborhoods as part of an effort to understand, for future historic properties management, which neighborhoods may possess well-preserved buildings representing various eras of Connecticut’s past.

A total of 1,501 buildings and structures were recorded and studied as part of the survey project. For each neighborhood, architectural historians studied historic maps, photographed buildings and streetscapes, and conducted background research on the history of these communities. In addition, they assembled a variety of period media reports about each survey area (newspaper articles, postcards, advertisements, guidebook excerpts, census data, etc.). For each historic structure surveyed, the Goodwin team filled out an electronic Historic Resource Inventory form. (HRIs are SHPO records that document the location, ownership, architectural style, condition, known threats to, and history of a building or structure.) RCG&A also wrote overarching reports on their findings in each of the surveyed neighborhoods. The research was preliminary in character, but it called attention to individual buildings as well as clusters of buildings that may warrant further investigation and, depending on those results, nomination to the State or National Register.

Like the National Register nominations, the architectural surveys can be used by towns and the SHPO for preservation planning, including hazard mitigation planning. They establish baseline data about historic resources in the communities. Residents of surveyed communities, town planners, local historic district commissions, and the SHPO can use the data to help determine whether to pursue nominations to the National Register or State Register of Historic Places, or whether to designate properties locally.

RCG&A produced an extensive historic context report on the twentieth century architecture and related historic development in Connecticut’s coastal counties, covering the period from 1900 to 1970. This study will help frame future preservation efforts in the Long Island Sound region by helping historians and preservationists evaluate how or whether a single property or multiple property district dating to the investigated era fits within a key theme.