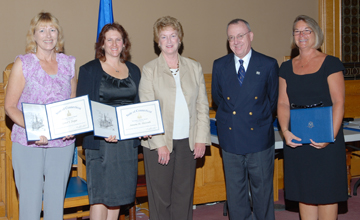 (left to right) Carol Ziogas, Annette McGrath, Governor M. Jodi Rell,
DDS Commissioner Peter H. O’Meara and Debbie Albers
Governor M. Jodi Rell recently presented three Department of Developmental Services (DDS) employees with the highest honor in state service.  North Region’s Debbie Albers, Supervisor Developmental Service Worker, Annette McGrath, Supported Living Worker and Carol Ziogas, Secretary 1 received the Governor’s Service Award for 2010 at a ceremony in the Old Judiciary Room at the State Capitol.  Nominated by retiree, Steve Robson, the three employees have been instrumental in the development and management of the annual Silent Auction.  In the past eight years, the auction has raised over $80,00 for the Connecticut State Employees Campaign for Charitable Giving and for individuals in the department’s Supported Living Program.
“They are worthy of this very prestigious award because of the amount of time and energy they put forth in planning the event,” said Mr. Robson, former North Region Assistant Regional Director.  “Many staff reach into their pockets to donate items for the auction, as well as many hours, outside of their jobs to ensure the success of the event.”
This year, the Silent Auction is being held on October 21st, at 470 Capitol Avenue, Hartford, Connecticut from 10 a.m. until 3 p.m. when the auction comes to final count down to the winners.
For more information or to donate items to the auction, please contact Carol Ziogas at (860) 263-2602 or e-mail at carol.ziogas@ct.gov.