Commission on Human Rights and Opportunities 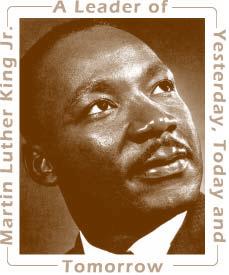 Martin Luther King, Jr.
"Living the Dream: Let Freedom Ring"
"The ultimate measure of a man is not where he stands in moments of comfort and convenience, but where he stands at times of challenge and controversy.  The true neighbor will risk his position, his prestige and even his life for the welfare of others."

Commission on Human Rights and Opportunities

(b) The commission shall: (1) Ensure that the commemoration of the birthday of Dr. Martin Luther King, Jr. in the state is meaningful and reflective of the spirit with which he lived and the struggles for which he died, (2) maintain a clearinghouse of programs and activities relating to the observance and promotion of such birthday in the state, (3) cooperate with the Martin Luther King, Jr. Federal Holiday Commission, community organizations and municipalities in the state, (4) develop and implement programs and activities for the state as it deems appropriate and (5) not later than September first, annually, submit to the Governor a report on its findings, conclusions, proposals and recommendations for the observance of such birthday in the following January.

(c) The commission may use such funds as may be available from federal, state or other sources and may enter into contracts to carry out the purposes of this section.

(d) The Commission on Human Rights and Opportunities shall serve as secretariat and consultant to the commission.