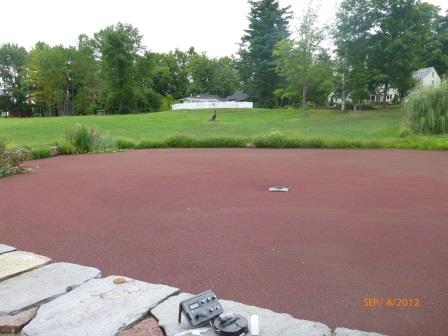 CAES IAPP surveyed two private ponds located on a private residence in Suffield, CT during 2012. The west pond was 0.7 acres while the east pond was 0.3 acres. The most dominant plant was a native, mosquitofern (Azolla species). This plant generally has not been observed in Connecticut covering lake surfaces as it was on this lake. Mosquitofern has not been observed to overwinter in Connecticut. CAES IAPP will continue to monitor this plant to see if changes in the plant's habitat are occurring in the state. Other plants found in the lake were shoreline species such as common reed (Phragmites australis) and cattail (Typha species). The east pond also had a potted native plant, white water lily (Nymphaea odorata).